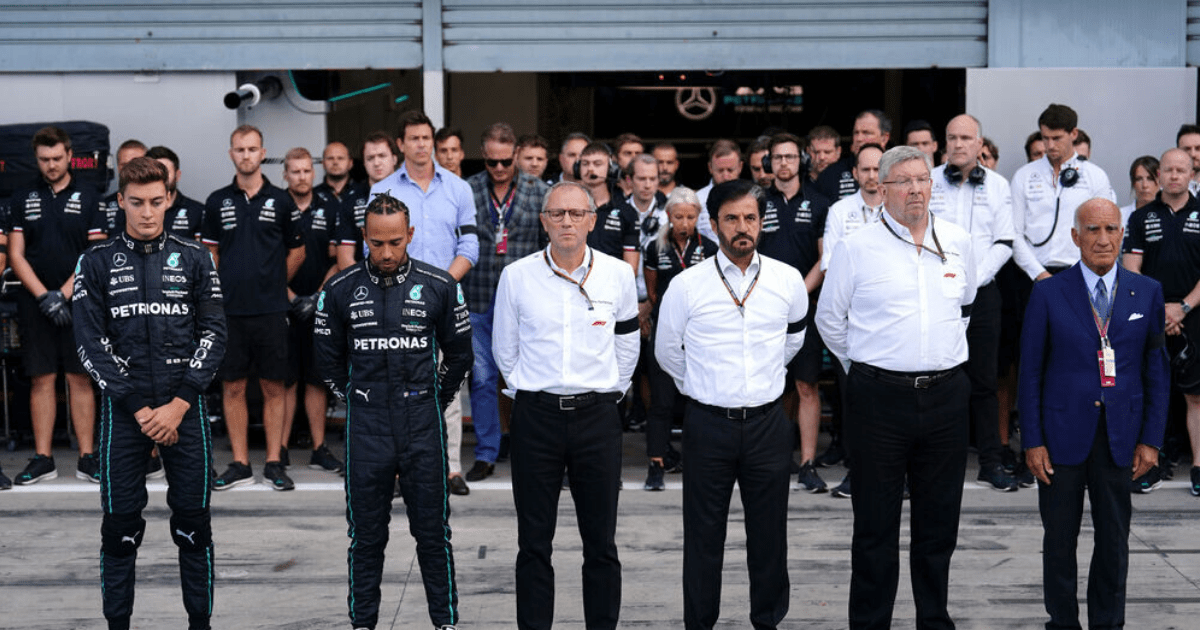 GEORGE RUSSELL offered the brightest hope of hearing a rendition of God Save The King come Sunday.

The Mercedes man was third-quickest in the morning session and P4 in the afternoon practice for the Italian Grand Prix here at Monza.

The paddock observed a minute’s silence before Friday’s practice

The teams came out of their garages to remember The Queen 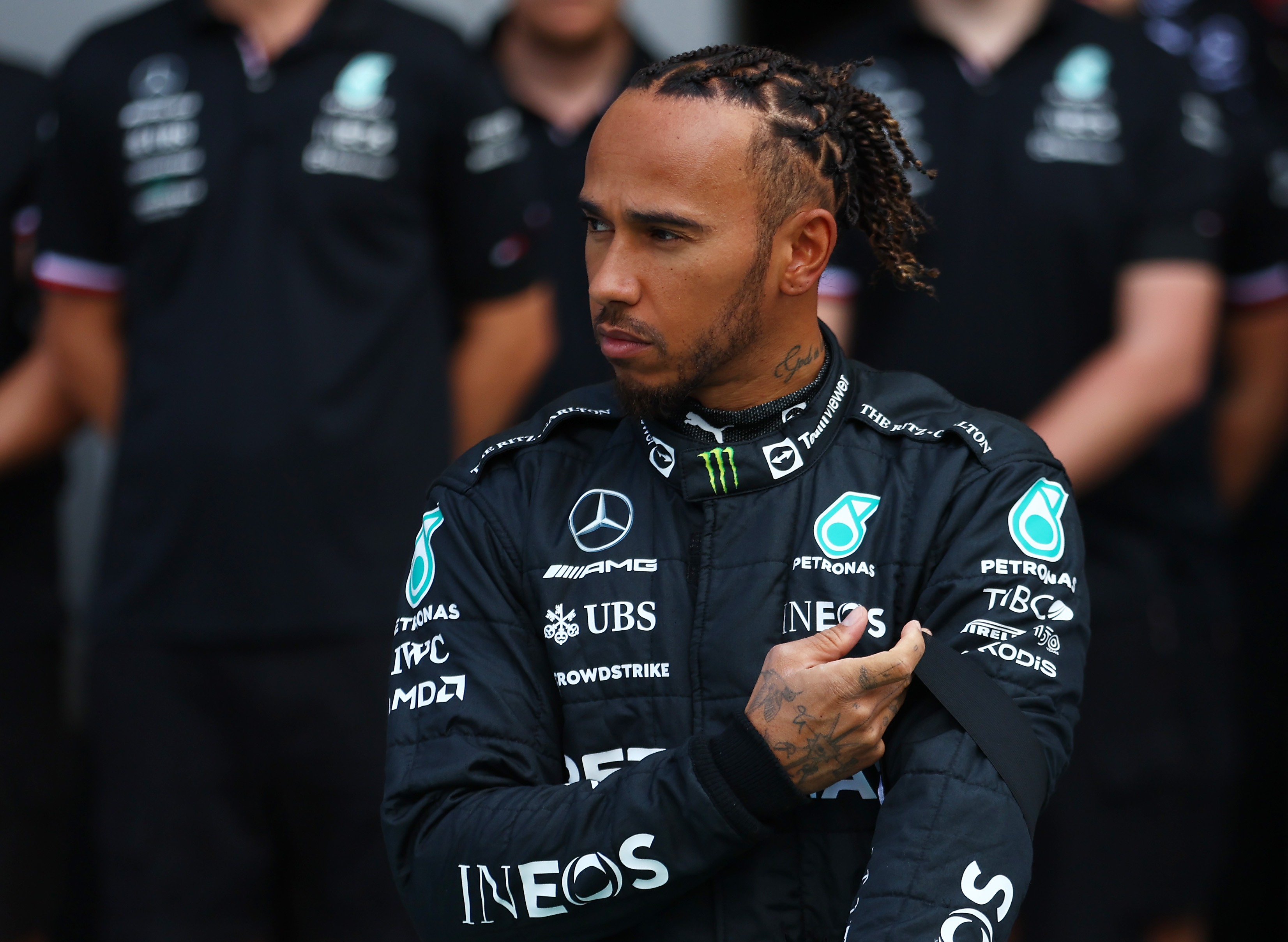 Hamilton wore a black armband to honour The Queen 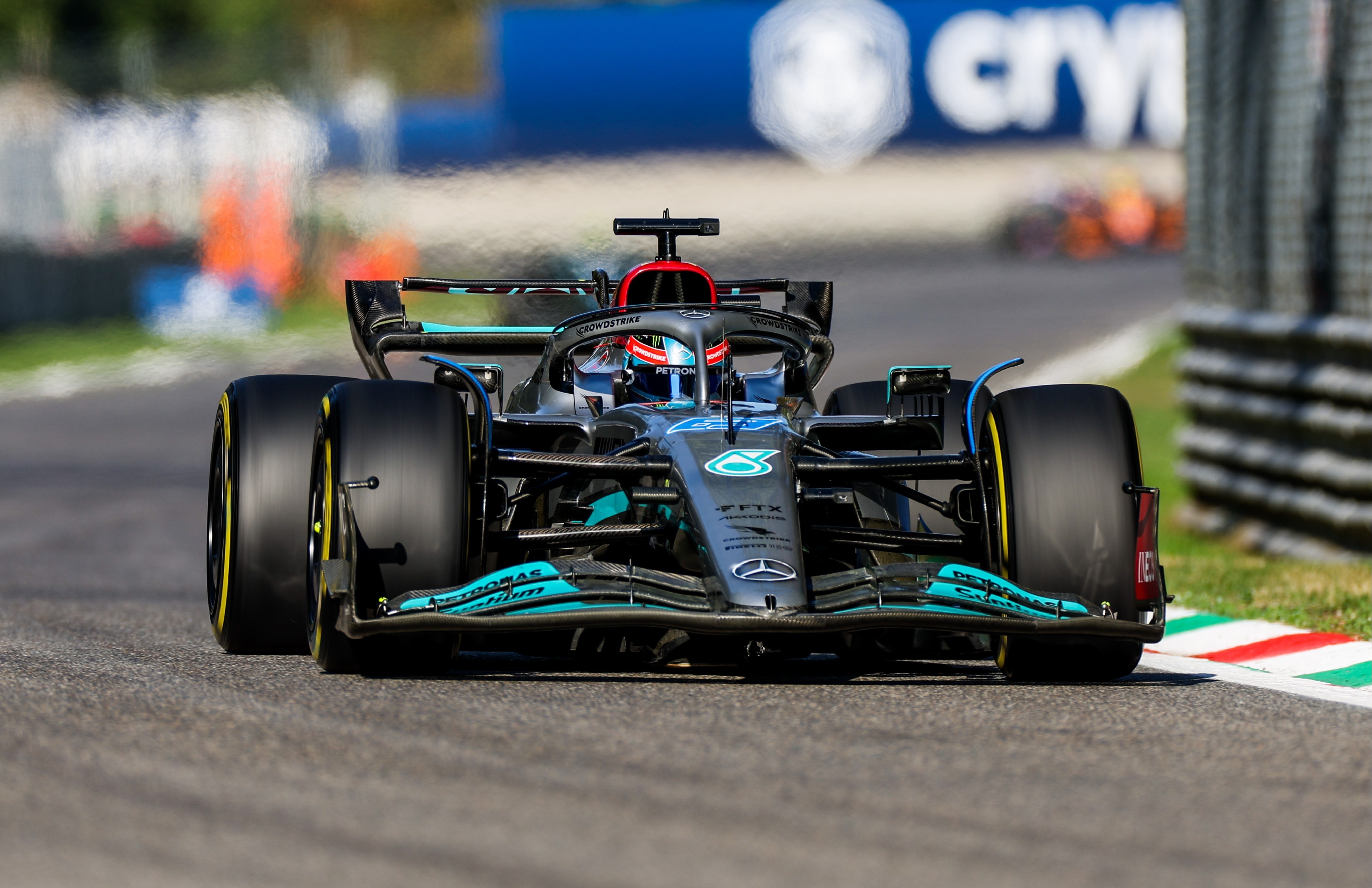 Russell finished third in the first practice at Monza

Russell, who was second last weekend at the Dutch GP, was in impressive form while his teammate, Lewis Hamilton, faces an uphill task to end his wait for his first win of the season.

Russell said: “FP1 looked strong but then Ferrari and Red Bull looked to have taken a step forward so we have a bit of work to do.”

Hamilton is likely to start no higher than 18th place owing to a host of grid penalties for an unscheduled engine change.

But even with the new power unit in the back of the car, he was not as quick as Ferrari or Red Bull.

Hamilton said: “We made some set up changes, nothing major but they went a lot quicker. I gave it everything but it just doesn’t feel particularly quick.”

Ferrari’s Carlos Sainz, who was quickest in second practice, also has the same punishment for the same rule breach.

And AlphaTauri’s Yuki Tsunoda is facing a hefty knuckle-wrap for failing to slow for yellow flags AND driving without a seatbelt at Zandvoort.

Prior to the first practice session, drivers held a minute’s silence in the pit lane as a tribute to Her Majesty.

The 20 racers stood in front of their garages and observed the poignant moment, before there was a short applause.

They were joined by F1‘s CEO Stefano Domenicali and the FIA’s President Mohammed bin Sulayem.

The teams then returned to their garages and began tackling the Italian circuit.

Championship leader, Max Verstappen, is also facing a penalty of five-places but still looking favourite for the win.

The Dutchman has a 109-point lead in the championship over Charles Leclerc and his teammate, Sergio Perez, who are tied in second place.

Meanwhile, Porsche have pulled the plug on their plans to join F1 with Red Bull.

The German car brand was seeking a 50 percent stake in the Milton Keynes based F1 team.

However, talks have now broken down with Red Bull boss Christian Horner saying the two companies had “quite different DNA”.

Red Bull have invested millions on building their own engine department and plan to run their own power units from 2026.

And Horner says the deal did not stack up with Red Bull unwilling to see the business split 50:50.

He said: “With Red Bull becoming a powertrain manufacturer in 2026, it was always natural to hold discussions.

“Those discussions have now been concluded, and the consensus was that it was not right for Red Bull’s involvement in F1.

“We committed to becoming a powertrain manufacturer a year and a half ago, or just over that.

“We’ve invested massively in facilities and people and the first Red Bull engine fired up approximately a month ago.

“So it’s a tremendously exciting new chapter for Red Bull. Porsche is a great brand, but the DNA is quite different.

“During the discussion process it became clear that there was a strategic non-alignment.

“Red Bull has demonstrated what it’s capable of in F1 as an independent team and now engine manufacturer.”

Did you miss our previous article…
https://www.sportingexcitement.com/formula-1/f1-star-daniel-ricciardo-reveals-bizarre-lando-norris-tattoo-on-his-neck-after-losing-bet-with-mclaren-driver/

Advertisement. Scroll to continue reading.
In this article:georgerussell, thequeen