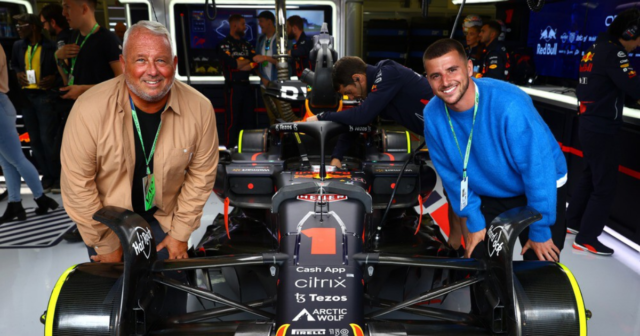 CHELSEA midfielder Mason Mount was called a “cheeky” chap by Geri Horner during his trip to the British Grand Prix.

The England international was one of several celebs in attendance at Silverstone for the highlight event of the British motorsports calendar.

And he event got a snap with Geri Horner, who dubbed him a “cheeky chappie”

Mount had VIP access for the day and was able to stroll around the paddock and take a peek at some of the teams’ control rooms.

And he ended up meeting former Spice Girl Horner – who is married to Red Bull chief principal Christian.

Geri shared her encounter with Mount and the footy star’s dad Tony on her Instagram story.

Across the picture of the smiling pair, she wrote: “Cheeky chappies.”

Clearly chuffed with the snap, Mount reposted it to his own story, although he didn’t include a caption.

Ferrari ace Carlos Sainz Jr was victorious on a glorious summer’s day at Silverstone, where he picked up his first-ever win.

But the race will be remembered for Zhou Guanyu’s horrific crash at turn one of the first lap.

The Alfa Romero driver crashed into Brit George Russell and was turned upside down before cannonning into the barrier.

The 24-year-old left the track on a stretcher but thankfully didn’t suffer any serious injuries.

He wrote on Instagram: “Hi everyone! Thank you all for the kind messages.

“I want to thank the marshals and the medical team at Silverstone, they were really fantastic.

“I’m keener than ever to get back on track, see you guys in Austria!”