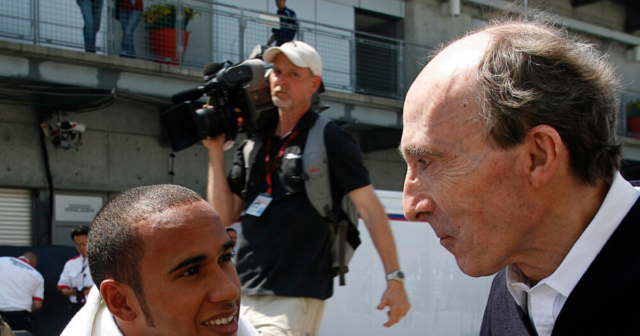 LEWIS HAMILTON has paid tribute to F1 legend Frank Williams – calling him a ‘racer and fighter at heart’.

The Williams F1 team founder passed away aged 79 earlier on Sunday after a lengthy battle with illness.

Lewis Hamilton met Frank Williams when he was racing for McLaren

Tributes to the popular team boss have poured in from all corners of the sport.

And now seven-time champion Hamilton has penned his own special message to the motorsport veteran.

The Mercedes driver wrote on Instagram: “Frank Williams was one of the kindest people I had the pleasure of meeting in this sport, always had time for me and always without judgement.

“I feel so honoured to have called him a friend.

“What he achieved in this sport is truly something special. Until his last days I know he remained a racer and a fighter at heart.

“I have the utmost respect and love for this man, and his legacy will live on forever.

“You will be missed Frank, but I will see you on the other side. My thoughts and prayers are with the Williams family.

“Williams started out as a racing driver and mechanic – before establishing his own team in Formula Two and Formula Three.

He made the step up to F1 in 1969 and his team finished second on two occasions that season.

Since then the Williams team have notched up 114 wins, nine constructors’ titles and seven drivers’ championships – including Damon Hill when he won the 1996 crown.

Williams was married to Virginia in 1974, who lost her battle with cancer in 2013.

Together they had two sons, Jonathan and Jamie, while their daughter, Claire, took over running the F1 team in 2013 until 2020, when it was sold to investment firm Dorilton Capital.