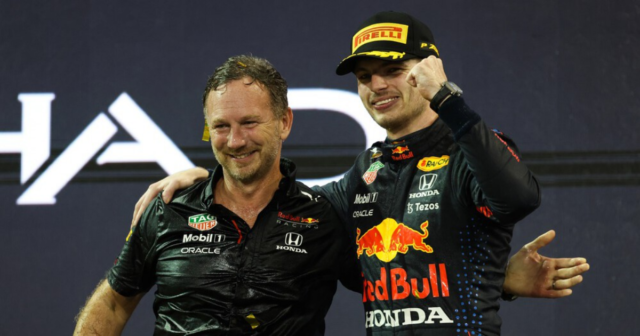 CHRISTIAN HORNER made a cheeky £4,000 bid to win a tour of the Mercedes F1 team’s factory.

However, the Red Bull boss could be stopped from enjoying his prize due to some of the T&Cs with the prize.

Horner made the bid at the Autosport Awards last Sunday for a “money can’t buy” tour of four of Merc’s Brackley HQ.

Red Bull say the bid was legit, with the money from the auction going to the Grand Prix Trust.

However, Mercedes have not yet decided to accommodate his mischievous attempt at a not-so-secret spying mission.

A Merc spokesman told : “We haven’t discussed it yet.

“To do so, we’d have to waive the terms and conditions under which it was offered — always pays to read the small print!”

The terms on the prize state “that employees of other Formula One teams are not eligible to take this tour”.

Ironically, just as Horner tries to check out the Mercedes base, their main man Lewis Hamilton has been given the all-clear to improve security at his £18m London home.

Kensington and Chelsea Council gave permission for the seven-time world champ to replace railings at the front of the mansion with a taller barrier.

Hamilton is revving up for his bid to wrestle back the throne after Red Bull star Max Verstappen snatched the 2021 crown thanks to a controversial last-lap restart of the final Grand Prix.

Talk of Hamilton quitting in frustration has eased, especially as he has been out for early-morning runs with Mercedes trainer Angela Cullen.

Nonetheless, Hamilton has been largely silent since his Abu Dhabi anguish in December.

Race director Michael Masi failed to follow rules as he left the Brit a sitting duck for Verstappen to overtake him on his fresher tyres.

The FIA are still deciding if Masi should be sacked for allowing Verstappen to overtake lapped cars.