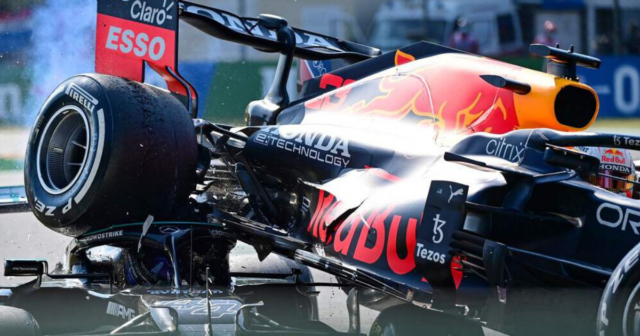 Hamilton, who is currently in New York, said he was lucky to be alive after they collided at the Italian GP, with the wheel of Verstappen’s Red Bull striking his crash helmet.

Hamilton was spared serious injury thanks to the halo cockpit protection system in what was the second time they have clashed in five races.

When quizzed if he would be speaking to the Dutchman, who also lives in Monaco – the same as the seven-times world champion, Hamilton said: “I need to have a think.

“This will continue until we learn from our scenarios on track and I don’t have a history of these incidents, so ultimately when you get away with things like that it is easy to continue to do it.

“All of us drivers are on the edge, and when we have the inside line, every single driver past and present, will try to hold on to his position.

“Of course, when you are wheel-to-wheel going into a corner and the car is still alongside you, eventually you have to concede and give extra space.

“When the car is not ahead of you, there is a known rule that the driver who is ahead, it’s his corner.

“Eventually a driver has to concede. I definitely do think we need to be looking into this and making sure the right decisions are being made.

“No one wants to see anyone get injured and if we can put some better protocols in, we can avoid this kind of stuff in the future.”

In words that will raise eyebrows in Red Bull’s Milton Keynes’ HQ, Shovlin said: “Max would never have made it into that corner, but it seems he always prefers to force an incident rather than relinquish his position in relation to Lewis.

“It’s a relief that Lewis was protected by the halo, otherwise it could have been worse.

“You see Helmut and Christian weren’t trying to blame Lewis. It kind of feels like they know Max was wrong as they will try at every opportunity to point out Lewis as the culprit.

“We believe that Lewis did nothing wrong and that Max was mostly the one who made the mistake.”

Their smash in Italy came after they also collided at speed at Silverstone, which resulted in Verstappen being sent to hospital.

F1 chief Ross Brawn says he hopes the two title contenders iron-out their differences before their rivalry again comes to blows on track.

However, Brawn does not expect either of them to back down in any of the remaining eight races of this thrilling season.

He said: “I don’t think either will back off at either time for the rest of the year but I hope the championship is won on the track not in the barriers or the stewards room.

“It’s clear both drivers could have avoided it. Ultimately I think it’s another consequence of two guys going head-to-head and not wanting to give an inch.

“It’s a shame they ended up in the gravel because it could have shaped up to be a great race — and we were deprived of that.

“I’m interested to see what impact this has on their ongoing battle for the title. We have lived through Silverstone which was a major and controversial incident.

“Personally, I wouldn’t say it has changed the dynamic. You’ve got two cockerels in the farmyard at the moment and we are seeing the consequence of it.”

Meanwhile, the FIA say they will investigate the incident, which saw Verstappen receive a three-place grid penalty that will be taken at the Russian GP.

Race Director, Michael Masi said: “Incidents that are different, so it’s not necessarily high g-force impacts or anything like that, but are unusual, we do look at. 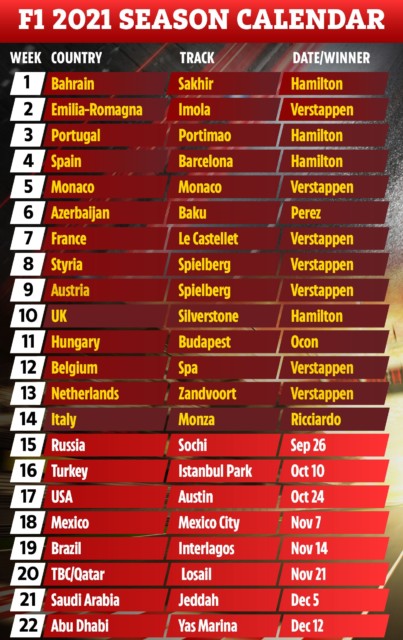 “Our safety department does look at them in detail, investigate and see what we can learn and what we can improve for the future.

“That’s how we have a whole lot of the safety features that we have today, and will continue to evolve into the future.

“We are already collecting all of the data, so we have all of the information and that will all go to our safety department together with any photographs and anything else we have along the way.”