Lewis Hamilton could be left with BRAIN DAMAGE due to porpoising Mercedes, according to shock Toto Wolff claims
Advertisement 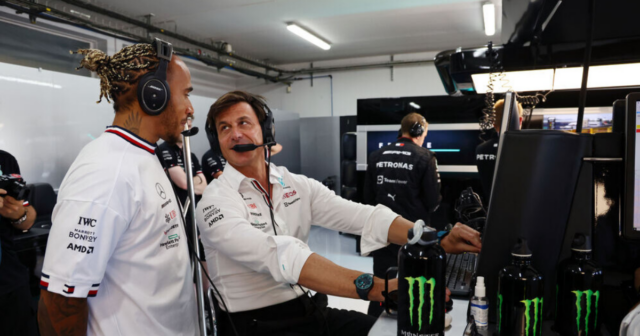 LEWIS HAMILTON could be left with brain damage because of his porpoising Mercedes, according to Toto Wolff.

The Mercedes team have struggled with their cars bouncing all season, leading to the eight-times Constructors’ Champions to be off the pace of their rivals.

Despite their issues with bouncing, the Mercedes team – spearhead by Wolff and Hamilton – are growing stronger

But in recent weeks the gap has closed as the grid headed to “smoother” tracks, with Hamilton on a run of five consecutive podiums.

The new 2022 regulations has seen porpoising become an issue at Mercedes and affect other teams on the grid.

And Wolff warned the situation was not safe for drivers.

He told reporters: “I still believe that the FIA and all of us must do something about it.

“Frequencies of 1 to 1 hertz that last for a few minutes can cause brain damage. We have 6 to 7 hertz for several hours.”

Rule tweaks are set to come into place after F1’s summer break for the Belgian Grand Prix.

The changes from the governing body the FIA should see porpoising restrained and could close what some see as loopholes in the new regulations.

Not all teams are happy about these changes, with the likes of Ferrari and Red Bull, who have largely gotten on top of the bouncing, potentially losing their speed advantage.

Red Bull team boss Christian Horner has signalled his discomfort for these changes, and said he “didn’t see any issues” with porpoising over the last few races.

Wolff has rejected the comments of his former rival.

He hit back: “That [argument] doesn’t count because Silverstone, Paul Ricard and Austria aren’t exactly tracks we bounce that much on anyway.

“I don’t want to come to Spa or some of the later races where the track isn’t as smooth as a conventional racetrack and we didn’t do anything about it.

“There is all this talk about lobbying in both directions, but what are we talking about here anyway?”

Further rule changes could come in from 2023 to raise the floors of the cars, according to some reports.

Horner was also not happy with that idea.

He added: “So I think there just needs to be a common-sense solution, not rewriting the rulebook for next year at a point of the year, with budget caps where they are, which is just too late.

“I think it’s actually an even bigger issue for some of the smaller teams that quite simply wouldn’t have the resources to be able to react.”

Did you miss our previous article…
https://www.sportingexcitement.com/formula-1/from-picking-up-litter-to-lgbtq-fight-and-saving-bees-vettel-is-more-than-an-f1-great-having-promoted-vital-causes/