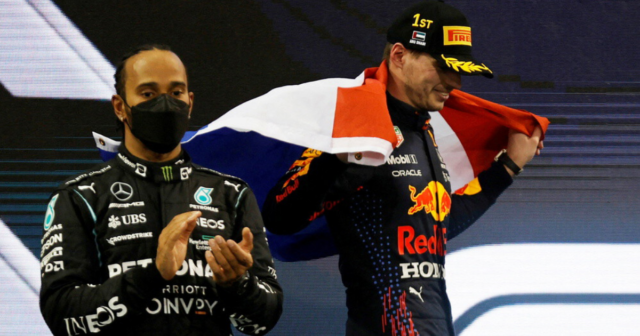 WARRING Formula One  drivers Max Verstappen and Lewis Hamilton could have been team-mates.

Red Bull chief Christian Horner revealed exactly how he pinched Verstappen from under the noses of Hamilton’s Mercedes team.

Hamilton and Verstappen COULD have been team-mates at Mercedes

But Mercedes missed out on signing the Dutchman SEVEN years ago — even though they wanted him.

Horner (right) knew the Dutch whizkid was destined for greatness after watching him drive a practice session in Japan —  arguably one of the toughest tracks to master — in 2014.

After getting permission to drive in the session by the FIA, the 17-year-old Verstappen was so quick, it had Toro Rosso boss Franz Tost squirming.

Horner said: “There was a desire from Mercedes to sign Max in Formula Three in 2014.

“I had dinner with Red Bull advisor Helmut Marko that evening and the only opportunity we had was to offer him a seat in Toro Rosso. He asked me what I thought and I said if he’s good enough, go for it.

“That was the advantage we had over Mercedes — they didn’t have a car they could put him in. That offer was made to give him a seat for the following season.

“Niki Lauda was pushing like hell for him at the time to join Mercedes. So, anyway, he got in the Toro Rosso in Suzuka and was told to take it easy.

“He was just 17 and five days old — and Suzuka is not for the faint-hearted.

“Lap two he was flat through 130R and Franz was panicking a bit and told him to slow down.

“We thought from that moment that this kid has real ability and his racing in Toro Rosso that year we saw he had balls.”

He sealed his debut drive with a stunning victory in the Spanish Grand Prix in 2016.

Horner said: “We put him in the Red Bull car. Daniil Kvyat was having a tough year so we got him in Barcelona.

“Despite having no testing prior to getting in the car, he was quicker in every session up until Q3 when Daniel Ricciardo pipped him right at the end.

“We put Daniel on what we thought was the preferable strategy but Max made the two-stop work and won the race on his debut in a car he had never sat in.”

After clinching the title in Abu Dhabi, Verstappen declared his intention to remain with the team for the rest of his career.

He already has a long-term deal and Horner says he senses Verstappen will get even better now he has  his first title.

He said: “We have seen him grow.  He joined us as a boy and he has grown as a man. He has finished first and second in every race this year, bar the ones he didn’t finish and one ninth place.

“He’s been outstanding. He has won more races, led more laps, and got the most poles. And let’s face it, since the summer break it has not been the fastest car.

“We are at the start of what could be a really exciting journey.”