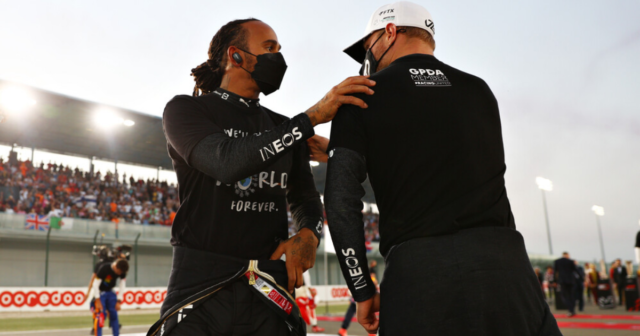 VALTTERI BOTTAS has revealed that he had a different spec Mercedes car to team-mate Lewis Hamilton during the Qatar Grand Prix last weekend.

The outgoing Finn, 32, endured a dreadful start on the Losail International Circuit.

Lewis Hamilton and Valtteri Bottas had different cars on SundayBottas, 32, was forced to retire during the race

And just as he was making his way back up the order he suffered a puncture, eventually having to retire from the race.

Team-mate Hamilton went on to win the Qatar GP, cutting Max Verstappen’s lead at the top of the Driver Standings to just eight points.

After the race, Bottas graciously tweeted: “DNF in Qatar

“Unlucky day for me, but good to see @LewisHamilton win the race. Let’s keep pushing @MercedesAMGF1 !”

Lifting the lid somewhat on his own woes, however, he told Finnish outlet Ilta Sanomat: “I have found out the reason, but I cannot give details.

“There were little differences in the cars.”

Team chief Toto Wolff gave Bottas a vote of confidence after the race.

He said: “We know that he can drive away when he’s at the front. So the speed is there.

“I have absolute confidence in him for the next races and I hope that we will have a good car. Then Valtteri will be at the front again because we need him there.”

On Bottas’ role in the battle, Wolff added to Sky Italia: “He’s very unlucky, because his start was very bad, then he recovered, he was P3 on track, and then there was this puncture.

“If he had finished the race, we would have had a bit of a safety margin for the Constructors’ Championship, now it will be all decided at the end.”

Ahead of next week’s penultimate GP of the season in Saudi Arabia, Wolff vowed to unleash his team’s ‘spicy engine’.

He said: “Saudi should be a good track for us but we know this year when you think it’s a good one it can turn the other way around, but it’s a long straight.