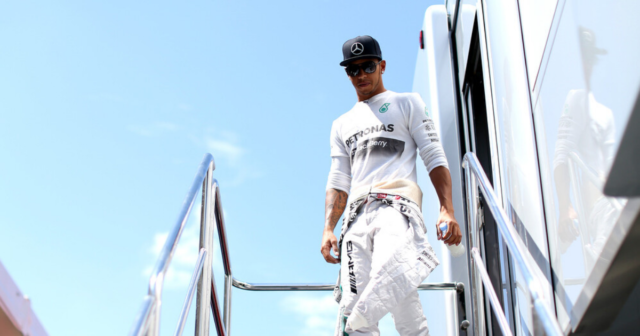 LEWIS HAMILTON had to be rescued ahead of this weekend’s US GP – from his own motorhome.

The Mercedes ace was locked inside his driver’s room, where he prepares for the race, for FIVE MINUTES.

The Brit was stuck and had to be saved by a member of his team who found out the key-code to open the door.

Hamilton was late for his own press conference and apologised after revealing his struggle.

He said: “I am sorry I am late. I got locked in my room and I couldn’t get out!

“But it feels good to be back here [in Austin]. We’ve had a very warm welcome from my fans and it is a place with some great memories.

“We always have a great crowd here and great races, so I am excited to be back for the first time in two years.”

Hamilton’s false start to the weekend comes as he eyes up victory in Texas, a track where he has won five times in eight years.

He currently trails Max Verstappen by six points with six races remaining and admits he must get the maximum points from this weekend.

He added: “It’s important to win all the races. We need to maximise our points over the next six races.

“There will be times when we can beat them, but in Mexico they can be strong again. A lot can happen in six races, we will take it race by race.”

Hamilton, who has been knocked off his perch as F1’s No.1 driver according to a fan survey, was voted in third place in the popularity contest, behind Verstappen and countryman Lando Norris.

But while the Dutchman might be the fans’ favourite, they will not get to see him in the next installment of the Drive To Survive show on Netflix.

The Dutchman has blasted the online streaming service for faking their fly-on-the-wall documentary series, which has been a hit across the globe.

He said: “They faked a few rivalries which don’t really exist, so I decided to not be a part of it and did not give any more interviews after that because then there is nothing you can show.