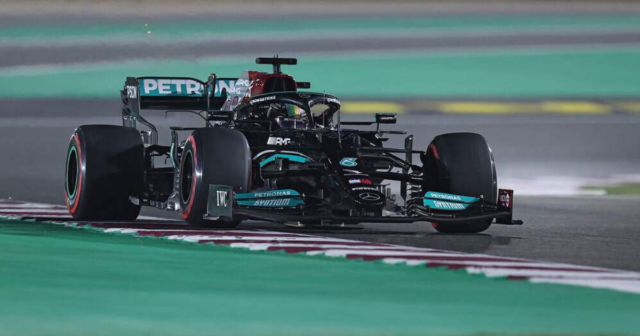 LEWIS HAMILTON’S title defence is alive and kicking after the seven-time champion put his Mercedes on pole for the Qatar Grand Prix.

The Brit produced a flier to go fastest under the lights as F1 visited the Losail International Circuit for the first time ever.

And Sunday’s race promises to be a thriller after championship leader Max Verstappen made it onto the front row alongside his title rival.

Verstappen leads Hamilton by just 14 points in the driver standings as the F1 season heads for its gripping conclusion.

The Mercedes superstar recovered from a penalty to spring to victory from 10th on the grid at the storied Interlagos circuit.

And there is bad blood because of it going into Sunday’s Qatar race after the two clashed in Sao Paulo.

Merc were left fuming after Verstappen appeared to force their driver off the road as he hunted an overtake on lap 48.

The stewards saw nothing wrong and refused to dish out any penalties over the incident at the time.

And this week Merc saw an appeal against that decision booted out by unimpressed F1 officials in Qatar.

Red Bull have in turn threatened to lodge their own complaint – this time questioning the legality of the lightning-quick Mercedes car.

Team boss Christian Horner refused to mince his words ahead of this weekend’s crucial race.

He declared: “The straight line performance in the last two Grands Prix has gone exponential and that concerns us.

It is all adding up to a tense finale as the F1 season enters its final Middle Eastern swing.

In this article:grandprix, Hamilton, lewishamilton, thefirst