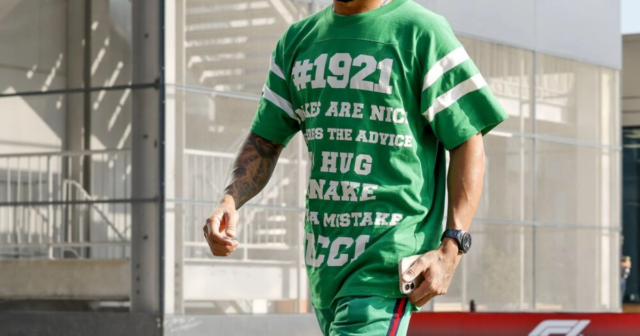 LEWIS HAMILTON has promised to keep his title fight with Max Verstappen clean because he doesn’t want to win it the ‘dirty’ way.

The Brit also says he doesn’t fear a Michael Schumacher-style wipe out in Sunday’s crunch race.

It’s winner takes all in Abu Dhabi for the F1 season finale as both drivers are level on points.

Verstappen though has the advantage of more wins, nine to Hamilton‘s eight meaning that if BOTH crashed out, the Dutchman would be crowned champ.

In 1994, Schumacher collided with Damon Hill, sending both drivers out of the race, allowing the German to win the title.

Schumacher repeated the stunt in 1997 when he crashed into Jacques Villeneuve – but this time he was disqualified from the whole season, handing victory to the Canadian.

Hamilton was quizzed by German publication Bild on whether he can expect the same treatment from Verstappen on Sunday.

He said: “No. I am not afraid of what may or may not happen at all. I don’t give any space to such thoughts.

“I don’t have a history of such accidents but I can only control my car and make my decisions and not those for Max.

“Of course there are situations in which you know that the corner could decide the world title.

“But then you have to take the risk to be the fastest and the first to cross the finishing line. I want to win the title, but do it the right way. And not dirty.”

Hamilton has the momentum coming into this weekend following back to back wins in Brazil, Qatar and Saudi Arabia.

If he is to win on Sunday he would achieve a record eighth world title that would move him clear of the joint record he currently holds with Schumacher.

But despite the enormity of his potential success, the 36-year-old is remaining remarkably level-headed and says he’s not thinking about another title.

When asked if he was thinking about what an eighth title would mean to him, he added: “No, but of course I know that. Still, it’s an issue for the fans and the media.

“We as a team concentrate fully on the current task. Nobody has ever won eight titles. We want to change that. We have done everything to achieve that goal.

“It is up to others to decide who is the best [driver of all time]. My goal is to always get the best out of myself. The titles are of secondary importance to me.”

Hamilton turns 37 in January but has two years left to run on his deal with Mercedes and says he is not ready to retire yet and hopefully has more victories ahead of him.

However, he is not likely to run into his forties like NFL legend Tom Brady.

When asked if he’d felt he’d achieved everything as the most successful F1 driver of all time, he said: “No of course not.

“There is always more to be won, even if I do win an eighth title. I still have a contract for two years. So why not?

“There is no precise plan in my locker but I won’t be active as long as Tom Brady! I am working on a few projects, for example my Mission44.

“I’m looking forward to the time after Formula One, when I can support my other projects more intensively.”