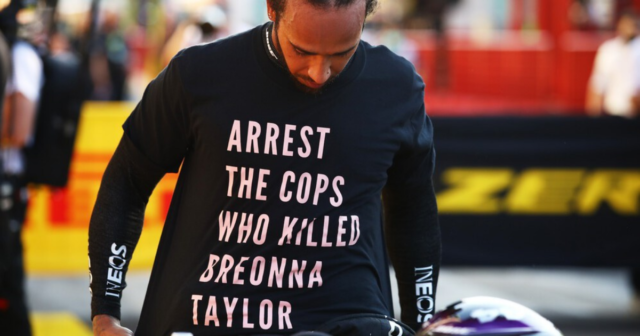 LEWIS HAMILTON got nervous about angering Formula One bosses with his anti-racism messaging.

The British legend is a leading voice in the fight against racism in sport and society but said it was not always easy and he feared kick-back.

Hamilton is a passionate supporter of many equality and anti-racism campaigns.

He has backed the Black Lives Matter movement.

And recently supported the justice for Breonna Taylor campaign after the 26-year-old black woman was shot and killed by white officers in her home in Kentucky, USA in March 2020.

The shooting led to mass global protests and Hamilton wore a supportive t-shirt at the 2020 Tuscan GP.

It read: “Arrest the cops who killed Breonna Taylor.”

And Hamilton admitted to the Wall Street Journal such moves made him nervous.

The 36-year-old said: “I can’t be second. I’m wearing that shirt – I’ve got to get to first to bring light to her name.

“I get these nerves like, ‘Shoot, I’m about to break the rules and people aren’t going to be happy with it’.

“They’ve changed a lot of rules after a lot of things that I’ve done.”

Hamilton has been on the end of racism himself and a particularly harrowing incident at the 2008 Spanish GP left its mark.

A group of fans in the Barcelona crowd had ‘blacked up’ and donned shirts that read: “Hamilton’s family.”

And revealing details of how he felt, Hamilton said: “I remember the pain that I felt that day, but I didn’t say anything about it.

“I didn’t have anyone. No one said anything. I saw people continuing in my industry and staying quiet.”

So much so he has sought to find answers as to why there’s a lack of black people taking part in the sport.

Hamilton set up and funded his own investigation after looking at the end-of-season F1 team photos, where he says he was reminded about the lack of diversity.

Did you miss our previous article…
https://www.sportingexcitement.com/formula-1/a-man-mountain-and-a-malfoy-lookalike-martin-brundle-mocks-heavy-handed-security-who-swatted-him-during-f1-grid-walk

In this article:formulaone, Hamilton, lewishamilton, thebritish