Lewis Hamilton reveals he turned down part in Top Gun: Maverick alongside Tom Cruise due to F1 season
Advertisement 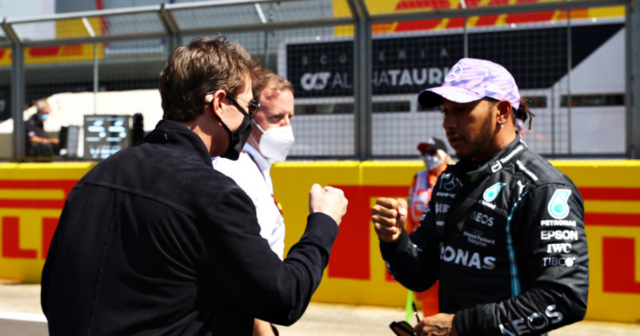 LEWIS HAMILTON revealed he turn down the part in Top Gun: Maverick alongside Tom Cruise due to his F1 commitments.

The seven-times World Champion was keen to make an appearance on the big screen in the huge summer blockbuster.

Cruise and Hamilton are good friends, and the Hollywood star can often be seen attending races

His mate, Tom Cruise, starred in the sequel as he did in the original 1986 Top Gun, which Hamilton was a big fan of.

The driver revealed he would have taken any minor part to just be in the film.

He was offered the chance to be one of the fighter pilots in the action movie, but could not make it because of his day job.

Hamilton told Vanity Fair: “Basically I’m a friend of Tom [Cruise]. One of the nicest people you’ll ever meet.

“He invited me to his set years ago when he was doing ‘Edge of Tomorrow’, and then we just built a friendship over time.

“When I heard the second one was coming out, I was like, ‘Oh, my God, I have to ask him’. I said ‘I don’t care what role it is. I’ll even sweep something, be a cleaner in the back’.”

Hamilton soon realised he would not have enough time to fit in the role alongside his preparation for the F1 season.

He added: “I’m a perfectionist. There just wasn’t time.”

The F1 star also said that turning down the role because of the clash was “the most upsetting call that I think I’ve ever had.”

A consolation for Hamilton is the fact that he is working with global star Brad Pitt on a new Formula One film, with the Mercedes driver acting as a producer.

Hollywood legend Pitt will reportedly perform the role of a veteran driver who comes out of retirement to mentor a young team-mate.

Hamilton is enjoying some time off from the F1 at the moment during its mid-season break.

He has spent his time riding an electric jet surfboard and he travelling to Africa to trace his roots.