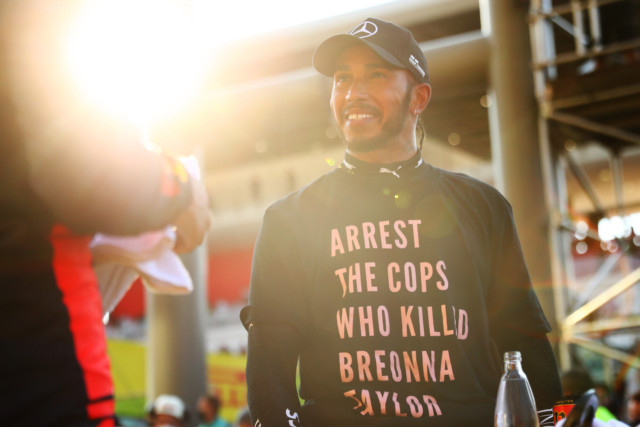 LEWIS HAMILTON has distanced himself from a future career in politics despite his continued success as a campaigner for equality.

At 36, the beknighted Formula One world champion’s racing career is in its final stretch and speculation continues over what he will dedicate his time to when he lets go of the steering wheel.

The Brit has been invigorated by the increased calls for racial justice since the police killing of George Floyd in the United States.

F1 has been compelled to enhance its own anti-racism message as a result with Hamilton regularly donning T-shirts in support of Black Lives Matter and the Justice for Breonna Taylor movement in the paddock.

But he will not be pulling on a rosette and seeking election after he calls it a day in F1.

Hamilton laughed when asked about the move by Corriere della Sera, and said: “No! I’m not good at politics.

“I’m just trying to make my contribution, to find a way to get messages across.

“To make sure my five-year-old nephew, and those of his generation, don’t live what we have. So that they find a more open world.”

Hamilton is one of a growing number of sports stars getting involved in how society operates, alongside the likes of Marcus Rashford.

Yet many of the great and the good stay away from potentially volatile political topics, something which the Mercedes star understands but feels shows a disconnect to the real world.

Hamilton added: “Many don’t talk because they don’t know enough, and I respect them.

“But I also don’t see why they can’t learn.

“We live in times when everyone comments on everything, sometimes without even trying to understand.

“I was reading reactions to the war between Israel and Palestine, the majority are people who have never set foot in those places or who have not read anything.

“There are those who say who cares and those who are worried, I feel responsibility.”