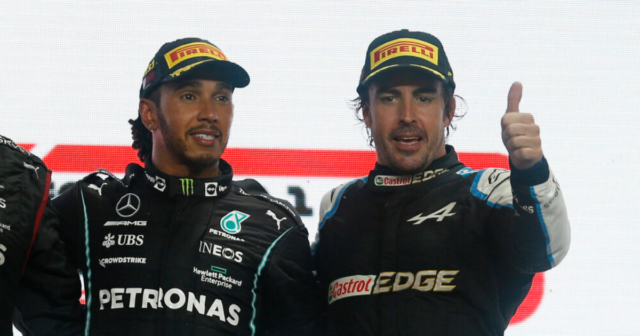 LEWIS HAMILTON should be booted to the back of the grid, according to Fernando Alonso.

The Spaniard is unhappy that Hamilton is set for an engine change for this weekend’s Saudi Arabian GP – a power unit labelled as ‘spicy’ by Merc boss Toto Wolff.

Lewis Hamilton and Fernando Alonso were on the podium in Qatar

Hamilton got a five-place grid drop in Brazil for taking the engine that was one more than his allocation of three for the season.

It triggered a sanction but it still powered him to an unlikely victory in Sao Paulo, despite starting in 10th.

Hamilton’s title rival, Max Verstappen, said at the time the Brit could take a new engine at every remaining race – and still go on to win the championship, despite the penalties.

And two-time world champion Alonso agrees and says there should be harsher punishments for any driver who takes more than three engines in a season.

He said: “Those who have exceeded a certain number of engines per year should be sent to the back of the grid.”

Hamilton has managed to reel in Verstappen’s advantage and whittle it down to just eight points with two races remaining.

Mercedes are the favourites for this weekend’s inaugural GP in Saudi Arabia.

The high-speed track is still being finished and 1996 world champion Damon Hill says he is worried about the safety of the Jeddah Corniche Circuit.

He said: “The track, we’re going to discover, it’s going to be a big challenge by the looks of things.

“I’m a bit worried about the speed. There’s not much run-off. They’ve got the SAFER barrier that they’re using, which is like they do in Indianapolis, but it’s going to be very high speed and not much run-off.

“So high-risk, high jeopardy. That always gets your attention as a racing driver.

“It’s a completely different type of track. It’s got banked corners. Some of the sweeps look quite long, so it could be a cross between something like Singapore and Baku.

“I think it’s great that nobody knows where they’re going. This is a completely unknown place, an unknown track and it’s at that crucial point in the championship.”

Did you miss our previous article…
https://www.sportingexcitement.com/formula-1/fans-in-hysterics-as-daft-punk-reunite-at-ballon-dor-ceremony-to-deliver-lionel-messis-seventh-trophy-to-stage