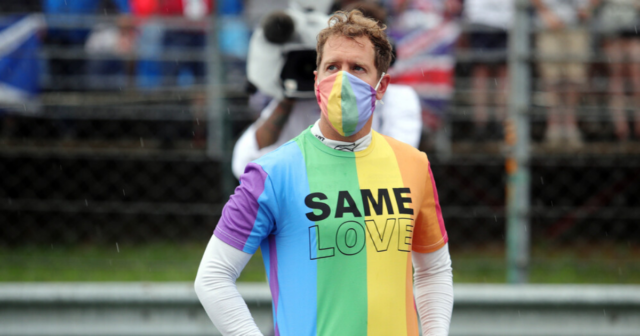 The German was given a ticking off for not removing the item of clothing, which also had the words “same love” written across the front.

It came after both Hamilton and Vettel spoke out against the Hungarian government’s controversial anti-LGBTQ+ law that limits education on homosexuality and transgender issues.

Formula One last year launched the ‘We Race As One’ platform launched that counts diversity, inclusivity and sustainability as its core principles.

But they were instructed to remove any such T-shirts before the national anthem and wear their race suits in a pre-race note issued by race director Michael Masi.

Vettel failed to do so, later claiming he forgot to take it off because of the onset of rain.

Hamilton wrote on social media: “Super proud of this guy. There is no rule that says what colour shirt you can wear and supporting the LGBTQ+ community is not reprimandable.

“This is bs. Well done, Seb. I’ll join you next time with the same shirt.”

He later removed the “bs” reference, amending his message to say: “Love to see this Seb supporting the LGBTQ+ community. Love always wins.”

Meanwhile, Vettel’s Aston Martin has been impounded and sent to France pending a further FIA investigation after he was disqualified from the Hungarian GP.

The German finished second but was later booted out after scrutineers were unable to obtain the required one litre of fuel from his car for a routine test.

They recovered just 300ml of fuel with the team insisting there was a problem with a pump to recover it for a sample.

Aston say they intend to appeal the decision to kick the four-time world champion out of the race.

Following his dismissal, Hamilton was bumped up to second place in the race but had trouble standing up on the podium.

This led the F1 champ with fears that he has a bout of long Covid after being left dizzy and suffering from exhaustion.

In order to recover, Hamilton will take a long break from F1 training.