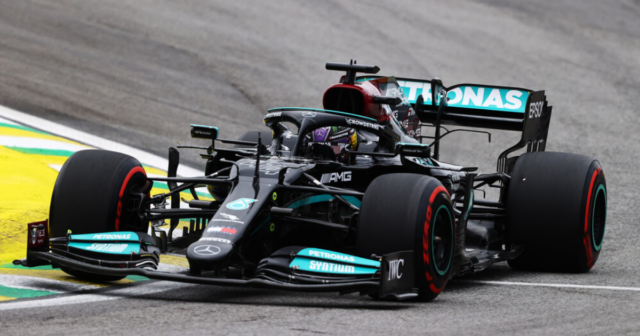 LEWIS HAMILTON stunned Red Bull with his monstrous speed as he will start ahead of Max Verstappen in sprint qualifying on Saturday.

The Brit will be out to score a maximum of three points in today’s sprint qualifying as he looks to claw back the 19-point deficit in the championship.

Hamilton’s five-place engine penalty will not affect sprint qualifying meaning he will fight his title rival on the front row in the sprint before dropping back down the grid for Sunday’s grand prix.

Hamilton said: “I’m so happy to be back here in Brazil. That’s the first pole in a long time.

“A big, big thank you to all the team because they’ve been working flat out. It’s been so hard coming from the last race for everyone.

“Today was a really good qualifying session. I’m really happy with it. We’ve got the penalty tomorrow but we will give it everything we’ve got.”

Verstappen crucially managed to split the Mercedes’ as Valterri Bottas will start third, which gives Red Bull a fighting chance for Saturday’s sprint.

The F1 title leader said: “Naturally when they take a new engine they have more power for the weekend.

“For me it’s not a big shock, I am just happy to be second, that’s a good position to start from.

“Of course you want to be closer but sometimes you just have to be realistic and there was not much more in it.”