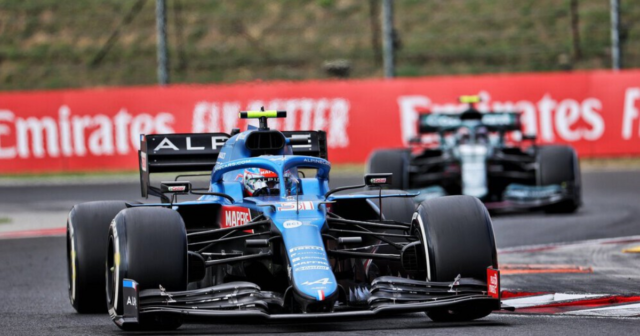 ESTEBAN OCON won his first-ever Formula One Grand Prix after a chaotic race in Hungary.

The Frenchman took advantage of early mayhem to glide into contention and held off Sebastian Vettel and Lewis Hamilton to take the victory.

The race began in crazy scenes as rain started falling half an hour before lights out, leading to the entire pack swapping to the Intermediate tyres.

Valtteri Bottas got off the line slowly and shunted into the back of Lando Norris, who had shot ahead in his McLaren.

That sent the two cars spiralling into both of the Red Bulls, knocking Sergio Perez out of the race and sending Verstappen down the order with damage.

A split second later, Lance Stroll also arrived too fast into Turn 1 and took out Charles Leclerc in the Ferrari.

A red flag paused the second race in a row as Red Bull patched up Verstappen’s car and the rain stopped.

Hamilton led the pack out and yet was startled to find he was the only racer NOT pitting at the end of the formation lap, leading to the bizarre scene of the Brit being the only man on the grid for the second lights out.

With the rest of the pack pitting for dry tyres, he was forced to stop after a slow lap on the Intermediates and dropped to the back when finally able to come in.

Ocon and Vettel were the new leaders as a result with points finishes suddenly on for Williams pair Nicholas Latifi and George Russell.

Latifi sat third and backed the pack up nicely for the two leaders to pull clear, before falling away as Hamilton charged into podium contention.

But a stunning show of defence from Fernando Alonso held him back for a few laps in an epic, and unexpected, battle of the veterans in Budapest.

Carlos Sainz’s resistance was more comfortably dealt with but Hamilton could only finish third, behind Vettel and winner Ocon.