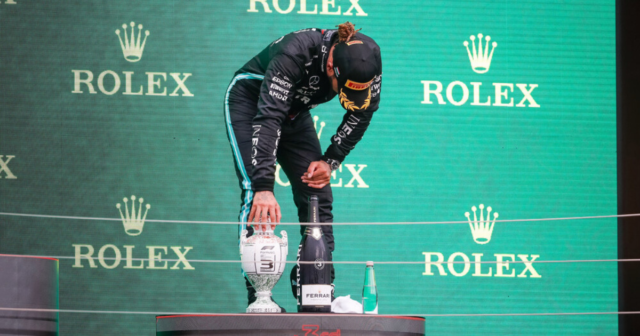 LEWIS HAMILTON has prescribed himself a period of rest and relaxation after being floored by long Covid.

The F1 champ was exhausted after a thrilling Hungarian GP where he went from first, to last, to eventually finish in second place.

The Brit contracted the disease last year and was forced out of the Sakhir GP in December after testing positive – and is still feeling the effects.

understands that the seven-time world champion will now commit to a period of extensive rest after completing his post-race debrief with his Mercedes team.

It comes as athletes around the world discover the effects of long covid.

Rower Oonagh Cousins missing out on making the GB Olympic team after her training schedule exacerbated the virus.

She told CNN: “It ended up developing into really bad long Covid. At its worst, for a couple of months, I would say I really struggled to get out of bed at all.

“Getting out of bed to make breakfast was a huge mountain to climb.”

Meanwhile, over the summer break Mercedes boss Toto Wolff is set to make a decision about who is Hamilton’s teammate next season.

George Russell is expected to get the nod bringing Valtteri Bottas’s time with the team to an end.

The Finn clattered into Max Verstappen, Sergio Perez and Lando Norris on the opening lap of the Hungarian GP after misjudging his breaking going into Turn One.

Bottas, who has been given a five-place penalty for the Belgian GP, while Russell was reduced to tears after scoring his first points for Williams.

He said: “It means more than just scoring our first points. It’s three years of hard work, dedication, tough moments…tough, tough moments personally and for everybody in the team.

“I’m emotional. It’s weird. It’s more than what the result showed. It shows that you should never give up and we’ve got here because when we were last every single race in 2019, we didn’t stop fighting.

“It just shows no matter the situation, there is always something to learn and you’ve just got to give it everything every time out there.”

Did you miss our previous article…
https://www.sportingexcitement.com/formula-1/defiant-sebastian-vettel-warned-for-wearing-rainbow-t-shirt-in-stance-against-hungarys-anti-lgbtq-law-before-being-dqd