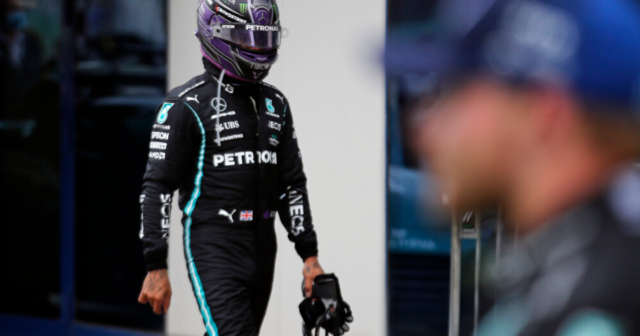 LEWIS HAMILTON would have finished EIGHTH in the Turkish GP had he stuck to his guns and NOT made a pitstop.

The Mercedes ace blasted his team for calling him for a late pitstop in last Sunday’s race, which dropped him down to finish in fifth.

Hamilton felt that had he stayed out, he would have been in with a shot of making the podium.

However, after crunching the numbers, Merc say he would have been looking at languishing down in eighth if he did as the tyres eventually failed.

Mercedes’ Chief Technical Officer James Allison said: “As ever with strategy, at the end of the race it’s always obvious what would have been the perfect lap [to pit on].

“However, if we look at it overall, the best time to have stopped would have been around the [Lap] 36, 37 mark, that was when Valtteri [Bottas, who eventually won the race] and Verstappen stopped.

“Had Lewis done the same and then treated his tyres nice and gently, then in all likelihood he would have come in a strong fourth, maybe be able to pressurise [Sergio] Perez for third and perhaps overtake him.

“When we eventually did call Lewis in, it was because the lap time chart that we use to make our predictions was telling us that it was not looking good.

“We were looking at something that was somewhere in the region of seventh, eighth place, based on the way in which the tyres were progressively degrading.”

Meanwhile, Hamilton defended his outburst over the radio, saying: “I’ve seen some of the press this morning which has made a bit too much of the incident in yesterday’s race of when to pit.

“It isn’t true to say I’m furious with my team.As a team we work hard to build the best strategy possible but as the race progresses you have to make split decisions there are so many factors constantly changing.

“Yesterday we took the risk to stay out hoping it would dry, it didn’t. I wanted to risk it and try and go to the end, but it was my call to stay out and it didn’t work. In the end we did pit and it was the safest thing to do.

“We live and we learn. We win and we lose as a team. Don’t ever expect me to be all polite and calm on the radio when I’m racing, we are all very passionate and in the heat of the moment that passion can come out, as it does for all drivers.

“My heart and spirit are out there on the track, it’s the fire in me that’s got me this far but any angst is quickly forgotten and we talked it through, already looking ahead to the next race. Today’s another day to rise and as a team (sic). Still we Rise.”