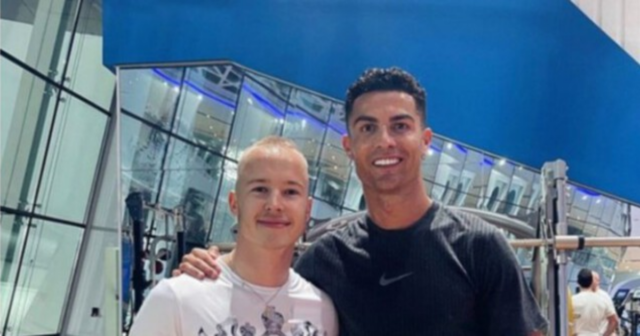 THE most famous Red Devil teamed up with the most infamous ‘Revs Devil’ at a sunny escape.

Ronaldo, 36 has been sipping from coconuts and enjoying beach massages during the Premier League’s two-week break.

And Haas-Ferrari’s Russian driver Mazepin, 22, is preparing for the new race season, starting in March.

The duo lined up together at an incredible outdoor gym – precise destination unknown.

And mesmerised Mazepin posted a work-out snap of them with the words: “Best gym session this year so far @cristiano, M” – Ron replying with a fist-bump emoji.

But while Ronaldo has been trying to live up to his GOAT reputation since joining United, Mazepin has been attempting to tone DOWN his wild reputation.

Former Real Madrid and Juventus frontman Ron has helped fire the Red Devils back up to fourth place, despite question marks over his role in Ralf Rangnick’s side.

And Mazepin has been keen to rebuild his public image following several controversies.

Just two months ago he was videoed arguing with nightclub bouncers in Mexico City.

But the son of Dmitry Mazepin denied claims he had been booted out of the nightclub earlier that night.

Previously he has apologised for filming himself groping a woman’s breast in the back of a car and posting it online.

Haas blasted his ‘abhorrent’ behaviour and Mazepin deleted the post – but not before a social media backlash, including the hashtag #WeSayNoToMazepin.

The woman involved later claimed the video was an ‘internal joke’ between them and that he was a ‘really good person’.

And if Mazepin needs a steer about looking after himself, then there’s surely no better man to keep the driver on track than Ron.