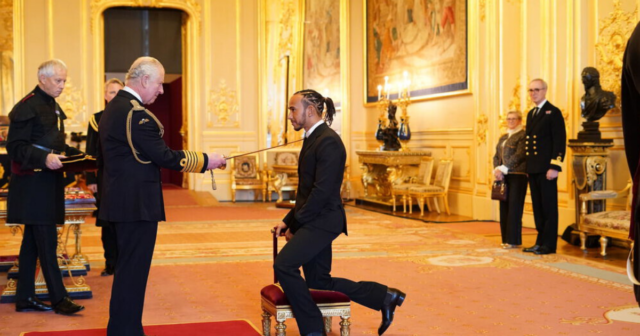 BERNIE ECCLESTONE has claimed Sir Lewis Hamilton did not deserve his knighthood.

The British race legend was honoured by the Prince of Wales at a Windsor Castle investiture ceremony on Wednesday.

He received the knighthood in recognition of his dazzling motorsport career, just days after his controversial Formula One title loss.

But Ecclestone, the former F1 chief executive, hinted Hamilton did not do ‘anything specific for the country’ to earn the honour.

He told told German broadcaster n-tv: “Only people who have really done something for the country should be knighted.

“I don’t think many people who are knighted now really deserve it.

“They all make a lot of money and donate some to charity but they haven’t done anything specific for the country.”

But the seven-time champion became the first to be awarded the honour while still actively competing.

But he dramatically failed to surpass Schumacher to an eighth after losing out to bitter rival Max Verstappen.

Verstappen, 24, won his first world crown on the final lap of the season in Abu Dhabi.

Hamilton’s team were furious that FIA race director Michael Masi fudged the rules to create a single lap showdown in the winner-takes-all-contest.

The Brit was a sitting duck on old tyres as Verstappen screamed past following a safety car period where Masi allowed five cars to get out of the way.

Both Hamilton and Mercedes felt the result was manipulated resulting in Verstappen winning the title in front of a huge TV audience.

But Ecclestone was critical of the furious reaction Merc chief Toto Wolff displayed.

He said: “Other team members were probably angry too. But he was the only one to show it.

“If Mercedes don’t win the championship retrospectively, he should at least get an Oscar for acting.”

Mercedes have now withdrawn their appeal against the outcome of the race after ‘constructive dialogue’ with governing body FIA.