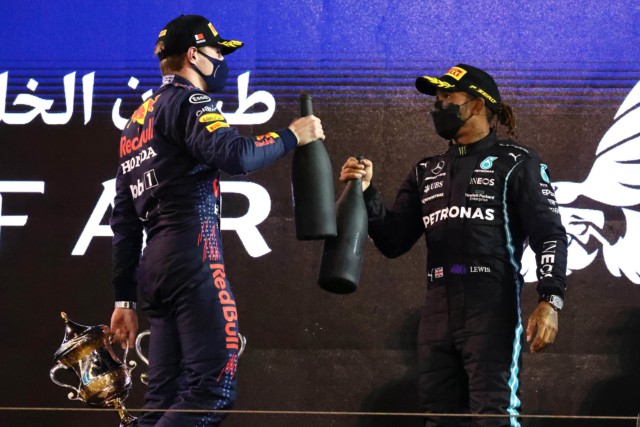 MAX VERSTAPPEN wants to give Lewis Hamilton “a proper fight” for the title after labelling the Brit’s success “boring”.

Hamilton is going in search of an eighth world crown this season while Mercedes have won the team’s championship seven years in a row.

This year, however, Red Bull look more than capable of taking the fight to the world champions.

And Verstappen says the sport needs that to happen to inject some much-needed excitement.

He said: “F1 needs a proper fight because for the last few years it has been a bit boring.

“On the Monday after the race, as a fan you really want to be looking forward to the next one, knowing that there are two, or even three teams fighting for that win.

“I guess after Lewis won his last six championships where the battle was maybe not as high for him, now being a seven-time world champion and the most successful driver in F1, he really wants that battle.

“He has already achieved everything and way more than you can ever imagine. Winning those amount of titles is very rare and it is not going to happen many times.

“But he is like, ‘okay, I am getting towards the end of my career and it is nice to see the younger guys coming up and making it more difficult for me’.

“And, of course, from my side, I am very happy to make it more difficult for him.”

Hamilton, 36, drew first blood in Bahrain at the season-opener, taking victory after Verstappen made an illegal overtake and had to relinquish the lead.

Verstappen and Hamilton were almost inseparable in Bahrain

But Verstappen is more than confident of taking the fight to Hamilton again over this season’s remaining 22 races.

When quizzed if he can pip Hamilton to the title, he added: “Yes, I think so. I just need to be quick on the track and that will do it.

“Lewis has a lot of experience but that is fine, I am up for it. Lewis is a cool guy and a fair driver so we race hard and trust each other which is very important.

“We also have a lot of respect for each other and we enjoy the battle. But is there more pressure on me now? No, it is less because I have a faster car.

“Everything is easier. It is easier to put a good lap together, it is easier when you are at the front.

“There are no nerves when you start first because that is what I love. I like to be chased. I prefer that much more than hunting.”

Verstappen has been linked with a switch to Mercedes but added that he is happy where he is for the meantime.

He said: “I have a contract at Red Bull until 2023, and I am very happy where I am. There is no reason to change.

“I never think too far ahead because I want to live in the moment. I want to win races and championships with Red Bull and that is why I signed for so long. I feel at home here and that is very important to me.”

Did you miss our previous article…
https://www.sportingexcitement.com/formula-1/f1-emilia-romagna-grand-prix-practice-live-stream-tv-channel-from-imola-latest-updates