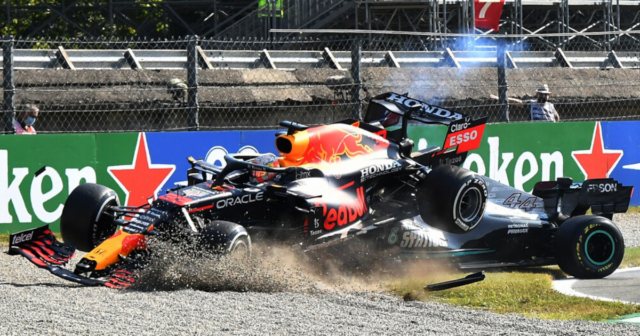 MAX VERSTAPPEN has been handed a three-place grid penalty for the Russian Grand Prix after crashing into Lewis Hamilton at Monza.

Sunday’s Italian GP ended in the gravel for both title rivals after the Dutchman attempted an overtake into the Turn 1 chicane.

But he failed to complete the move and bounced OVER Hamilton‘s car as the Mercedes driver defended his position.

With both men out of the race, Formula One stewards waited until after the chequered flag to review the incident.

Voth were called to answer questions on the crash and it was decided that Verstappen, 23, should be handed a three-place penalty for the next race’s starting grid.

Two penalty points have also been added to the Red Bull star’s licence, which was previously clean.

After reviewing the footage, stewards determined that Verstappen was never ahead of Hamilton’s front wheel and therefore did not have the right to the racing line.

The Brit was also considered to have taken an ‘avoiding line’ to limit the chances of contact with his rival.

That left them with the view that Hamilton had put his car in a ‘reasonable’ position’ and Verstappen ‘predominantly to blame’.

The incident also saw the 36-year-old escape potentially serious injury as the Red Bull bounced off the Halo device above his head.

It left Hamilton feeling ‘sore’ but both men walked away from the scene of the crash.

Verstappen had played down his role in the collision before seeing the stewards.

He declared: “These things happen. We are all professional enough to get on with it and keep on racing each other.

“He kept on pushing me wider and wider and at one point there was nowhere to go and he pushed me onto the sausage kerb and that is why we touched, because the rear tyre bumped up to his tyre.” 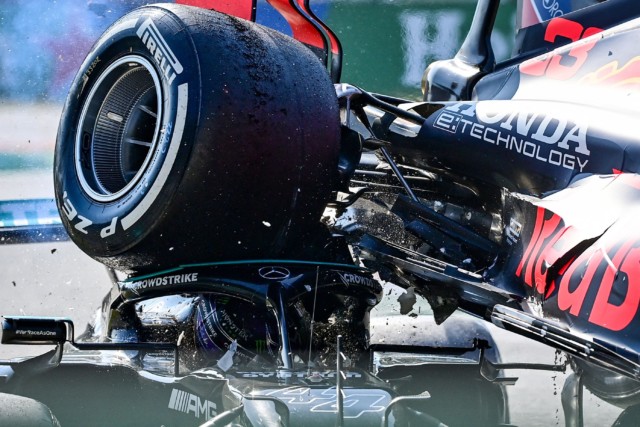 The Brit escaped serious injury thanks to his Halo device

Following the final race of a triple-header in Italy, F1 now heads to Sochi for the Russian GP on September 26.

Verstappen has increased his lead in the Drivers’ Championship to five points after second in Saturday’s sprint qualifying.

Hamilton said: “I made sure I left a car’s width on the outside for him. I went into Turn 1 and I was ahead and was ahead going into Turn 2, then all of a sudden he was on top of me.”