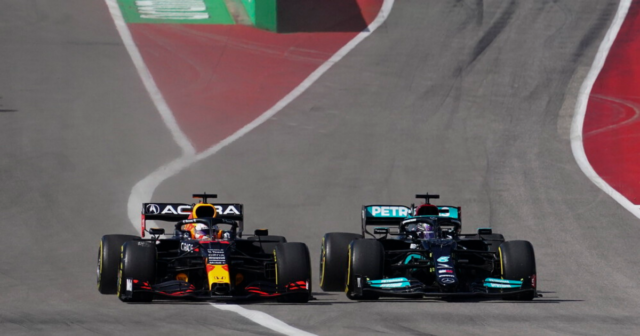 MAX VERSTAPPEN won the US GP as this Texas shootout turned into a bigger nail-biter than Paul Scholes.

They flocked to Austin in their thousands to see this race, as for the first time in its 70 year history, F1 finally looks to have cracked the American market.

Sure, the popularity of the Netflix series, Drive to Survive, has helped but so too has this epic fight between Lewis Hamilton and Verstappen for the title.

And those fans were treated to a pulsating duel in the desert as Hamilton reeled in Verstappen’s advantage, creating a thrilling climax.

Hamilton made a fantastic start from second on the grid and in his attempt to block the Mercedes man, Verstappen tried to cut him off going into Turn One.

The two avoided contact as this time, unlike when they collided at Silverstone, Verstappen bailed out and was forced to go wide.

However, with the bit firmly between his teeth, he would not let the rear of the Mercedes out of his sight and hung on the back of Hamilton’s gearbox.

In doing so, it damaged his tyres and Verstappen stopped for fresh tyres at the end of lap 11 of this 56 lap race and when he returned to the track he was in fourth place.

Hamilton did stop three laps later but Red Bull’s decision to pull the trigger first saw Verstappen pull off the undercut and propelled him to first place, as Sergio Perez and Charles Leclerc also stopped for tyres.

But if there is anything we have learned from Hamilton over the course of his battle with Verstappen, he is determined to take the fight to the Dutchman.

The fightback started around lap 27, as the Brit started to eat into Verstappen’s lead.

Red Bull watched anxiously as Vertstappen’s lap times tumbled and decided to stop him again on lap 29 for a final stop.

Red Bull had played their hand and the Mercedes staticians at their Race Support Room in their Brackley HQ calculated the numbers.

It left Verstappen needing to nurse his tyres to the finishing line as his race was heavily compromised.

Sensing a win was on the cards, Hamilton received a radio message from boss Toto Wolff, who told his driver he was racing for the victory.

No further incentive needed, Mercedes left Hamilton out for as long as possible before pitting him from the lead on lap 37, giving him a fresh set of hard tyres to hunt down Verstappen, who was back in front as a result of the pitstop.

The thrilling climax began with the gap between the two at 8.8 seconds as Hamilton emerged from the pitlane.

With 15 laps to go, that lead was sliced to 6.5 seconds. He then hit traffic as he struggled to pass the back markers.

By lap 45, the gap was even further reduced to 3.7 seconds. With 10 laps to go, it was under three seconds.

With five to go, it was down to two. It was nail-biting stuff as Hamilton closed in on his opponent.

Two laps to go and the gap was under a second but Verstappen held his nerve and held off the threat of Hamilton.

Another lap and the world champion would have caught him.

Did you miss our previous article…
https://www.sportingexcitement.com/formula-1/what-is-drs-what-does-it-stand-for-and-when-did-f1-introduce-it-all-you-need-to-know-about-drag-reduction-system