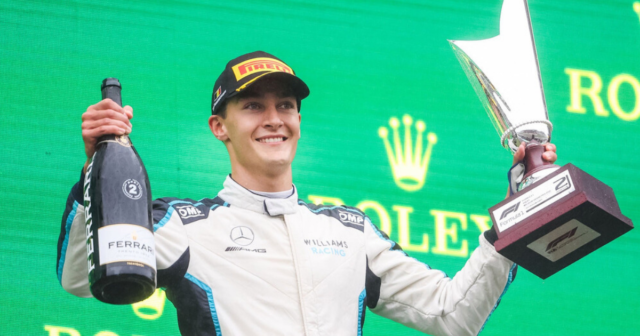 GEORGE RUSSELL has been confirmed as Lewis Hamilton’s team-mate at Mercedes for the 2022 season.

After over four years as part of the Formula One team’s academy, the Brit will step up from Williams to replace Valtteri Bottas.

George Russell will race for Mercedes after starring with Williams

The reigning world champions have been mulling over Russell’s promotion for over a year, amid Hamilton’s dominance of the Drivers’ Championship.

But Bottas’ difficult first half of the season and Russell’s continued rise in one of the slowest cars on the track made the decision inevitable.

The 23-year-old stated: “I’d be lying if I said I wasn’t absolutely buzzing.

“But I’m under no illusions as to the scale of the challenge; it’s going to be a steep learning curve.

The length of Russell’s contract has not been confirmed with only the 2022 season named in Tuesday’s announcement.

Hamilton, 36, is committed until the end of the 2023 campaign and his new team-mate cannot wait to continue learning from the seven-time champ.

Russell added: “I’ve looked up to Lewis since I was in go-karts.”

“The opportunity to learn from someone who has become a role model both on and off track can only benefit me as a driver, a professional, and a human being.”

Long known as a huge talent of the future, the King’s Lynn-born racer won the GP3 and Formula 2 titles in consecutive years to earn his step up to F1.

A couple of point-less seasons with the underperforming Williams team saw him given the opportunity to replace Hamilton when the veteran caught Covid-19 ahead of last year’s Sakhir Grand Prix.

A series of team errors denied him a shock win but Russell snapped up his first points for Williams at last month’s Hungarian Grand Prix.

The man dubbed ‘Mr Saturday’ then qualified second in the wet at Spa and the race-day downpour meant a two-lap race and first podium finish.

Bottas, 32, had already been confirmed as an Alfa Romeo driver for next season, replacing the retiring Kimi Raikkonen.

Mercedes team boss Toto Wolff admitted that it had not been an easy decision to replace the Finn, who played a part in four Constructors’ wins.

He said: “This hasn’t been an easy process or a straightforward decision for us.

“Valtteri has done a fantastic job over the past five seasons and he has made an essential contribution to our success and to our growth.

“[Russell] has been a winner in every racing category – and the past three seasons with Williams have given us a taste of what the future could hold for him in F1.

“Now, it is our challenge together to help him continue learning within our environment and alongside Lewis, the greatest F1 driver of all time.

“I am confident that as their relationship grows, they will form a strong team and deliver for Mercedes on and off the track in the years to come.”