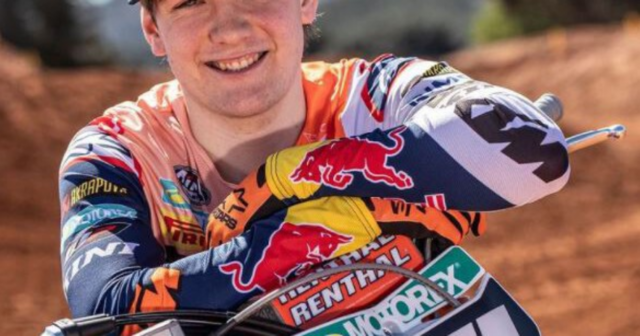 A MOTOCROSS rising star has been killed in an avalanche along with two of his friends while on a skiing tour in Austria.

Rene Hofer was just 19 when he and his pals were swept away and buried by the slab of snow in Tweng, Salzburg.

Rene Hofer was a rising star on the motocross scene

Hofer, from Austria, was tipped for greatness in his sport having already won a myriad of events and championships.

He was among 11 other skiers when they were ascending a mountain while on a ski trip.

And then suddenly the group is understood to have been hit by an avalanche.

Eight members of the party were swept away, with three of them – including Hofer – being killed in the snow.

The other men who died are also Austrian, and are aged 19 and 24.

Rescuers were able to locate two of the victims with the help of their search devices but one was already dead and the other died at a hospital in Klagenfurt.

The third buried skier wasn’t carrying a search device – so his body was located about four hours after the avalanche and recovered.

And two other members of the group were buried, but were able to free themselves and were taken to hospital.

Tributes have poured in for Hofer – including a heartfelt message from his team KTM.

The team described him as a “multi-time junior champion and GP winner with a bright future in Grand Prix ahead of him”.