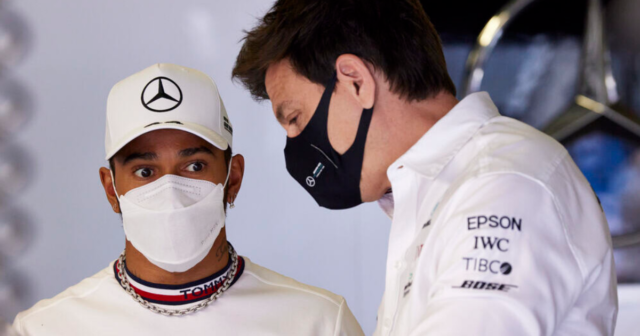 But a late safety car, followed by some bizarre decisions from race director Michael Masi, saw Verstappen overtake his rival in the last lap to seal his first-ever title win.

Wolff told Bild: “It is definitely on a par with the ‘Hand of God’ by Diego Maradona, or the Wembley goal from 1966.

“An inconsistent decision by the race director took the title away from Lewis.”

As a result of Masi’s decision to race a final lap, Hamilton missed out on a record-breaking eighth F1 title.

But a decision was taken to drop proceedings, with Wolff adding: “The FIA would have been both defendant and judge.

“That unleashes a sense of powerlessness, just like on Sunday in the last round.

“I haven’t felt like that since I was a kid.”

But the FIA could yet punish Hamilton for not attending the post-season trophy gala.

New president Mohammed Ben Sulayem explained: “First of all, as a driver, I feel emotional but at the end of the day rules are rules.

“So we are going to look into the side where the technical rules are there to be employed.

“Was he in breach? I have to look into it. We have to be following our rules, but in the meanwhile it doesn’t stop us from making a champion feel good about the sport.

“It’s easy to be nice to people, it’s cheap to be nice, and also to motivate people, but if there is any breach there is no forgiveness in this.”