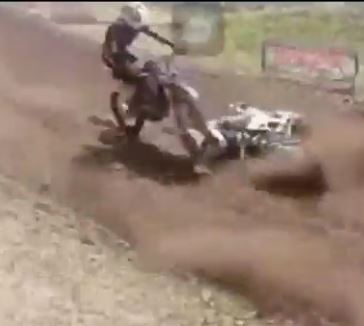 A ONE-ARMED motocross rider died during a race when he was run over by two other competitors after falling from his bike.

Alberto ‘Wey’ Zapata, 23, went to the ground after losing control of his motorbike during a jump on Sunday.

Agonising footage showed one of two riders unable to avoid Zapata, who rode despite only having one arm after a road accident led to a limb amputation, as he came off and crashed into the dirt.

The accident took place during a competition in San Agustin, a city in the Argentine province of Cordoba.

The race was on the same motocross track where Zapata returned to racing following his car accident which led to his amputation.

Sergio Unac, governor of the province of San Juan, home of the brave motocross racer, said: “I am totally heartbroken by the sad news of the death of Wey Zapata.

“My condolences to his family and friends at this sad moment in time.

“Rest in peace warrior. In San Juan we will remember you as a great sportsman and an enormous fighter.”

The disturbing incident happened less than five months after he cheated death by crashing his car on a main road south of the Argentine city of San Juan.

He broke his collarbone and had to have his left arm amputated after losing control of his Chevrolet Corsa Classic on November 15 last year.

The motorbike fanatic received a standing ovation on each lap when he returned to racing, defying health professionals who told him he would have to give up his passion.

He celebrated his first podium finish after his return in the southern Argentinian city of Chubut on March 4, taking to Instagram to write: “First podium after my amputation.

“The results of hard work, desire, dreams and a truly unforgettable moment.”

Zapata recalled recently how his mum had told him the news of his amputation, revealing: “The medics didn’t tell me but they hinted at it.

“When I was in the hospital I couldn’t feel my arm and wondered if I had still had it until my mum told me, ‘No, you haven’t got your arm, they amputated it straight after the accident.’”

His life was saved by a passer-by who spotted his crashed car and stopped his arm bleed with a tourniquet.

He said after his last podium finish a week before his fatal accident: “I sometimes find it hard to believe what’s happening to me with the difficulty I have riding a motorbike with one arm four months after the amputation.

“It would be enough for me just to be able to enjoy being back on a motorbike again so being able to savour my third podium since my return to racing is wonderful.” 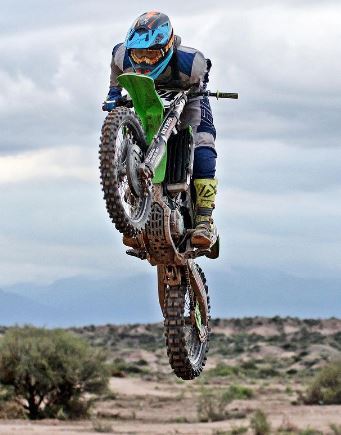