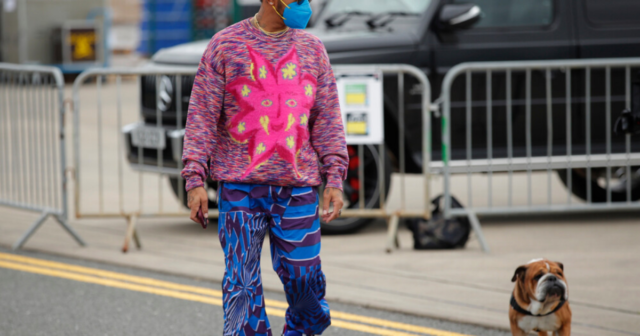 LEWIS HAMILTON is committed to Formula One having sacrificed his love life to focus on winning world titles, says Ralf Schumacher.

The German, 46, remarked that Hamilton’s dog, Roscoe, is his chief life partner – but told the Brit that there is ‘no need to change anything’.

Lewis Hamilton is regularly joined at circuits by his beloved pet dog, Roscoe

An eighth world championship is on the 36-year-old’s agenda, which would beat the record of Michael Schumacher, the brother of ex-racer Ralf.

“I don’t see a partner at his side in his life, except maybe for his dog.

“If you live life the way he does, there is no need to change anything. Especially when you win so much.

“From my point of view, I can say that it is also a strange feeling when you as a racing driver suddenly wake up in the morning and no longer have this well-planned year.

Hamilton‘s long-term relationship with singer Nicole Scherzinger ended in 2015 and he has remained private about his love life since.

While a number of F1 drivers have families, including Sebastian Vettel and Kimi Raikkonen, Hamilton has admitted his difficulties in that regard.

He said in 2019: “In general for athletes, having the right mindset and trying to find the right balance of how dedicated you are as opposed to resting back and enjoying your quality time, it’s different for everyone.

“But having spoken and read about other athletes in different sports, it’s obviously quite similar for all of us.

“There are those that manage it, look at Seb. There are many athletes who have happy lives in the background.

“But I for one also find that incredibly difficult, with your goal to be as competitive as you can be.

“Ultimately, you want to be 100 per cent committed because you never want to be any less committed than the person next to you.

“There’s only a certain amount of you as a whole that you can give to everything. It depends how much of a sacrifice you want to make.”

Schumacher has urged Hamilton to keep racing while he remains at the top of his game.

After winning the British Grand Prix at Silverstone in controversial style, the reigning champ is only eight points behind Max Verstappen in the drivers’ standings and is contracted to the end of the 2023 season.

And Schumacher noted: “I think it’s better to race for longer and then stop completely, than stop early and later start a comeback.

“Lewis is still fully in there, still fast.

“One should rather ask why Kimi Raikkonen is still driving at 41. His best times have been behind him for a long time.”