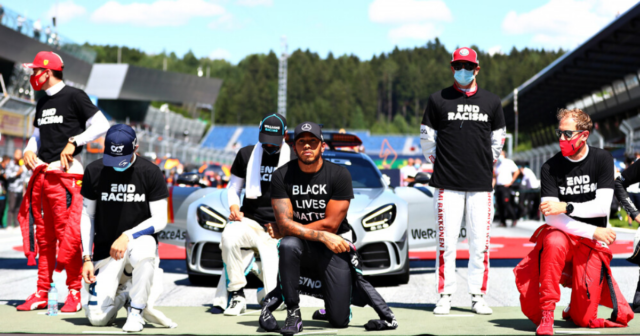 SEBASTIAN VETTEL says he was “surprised” F1 chiefs have dropped the knee gesture from their pre-race programme.

Since 2020, time has been put aside for drivers to show their support for diversity and inclusion as part of F1’s “We Race As One” campaign.

Sebastian Vettlel, far right, takes the knee with fellow drivers during the 2021 season

However, that has been ditched for this season with Vettel saying drivers were not even consulted on the move.

The German, who was speaking ahead of the launch of Aston Martin’s F1 car for this season, said the decision was made from a “business” perspective.

When quizzed about the changes, he said: “No, they just changed.

“I hope that as drivers, we find a way to get together and find a slot of still expressing topics that are important to us.

“Probably not all the drivers care, but I think there’s some that really do care. And it’ll be great to get together.

“But probably it was getting a bit too strong and individual for the business side of things.”

Vettel was one of the leading F1 drivers who have pushed for change and has supported Lewis Hamilton‘s campaign to raise awareness for another of causes.

Vettel has publicly supported the LGBTQ+ community by wearing items of clothing with the Progress Pride colours and supportive messages.