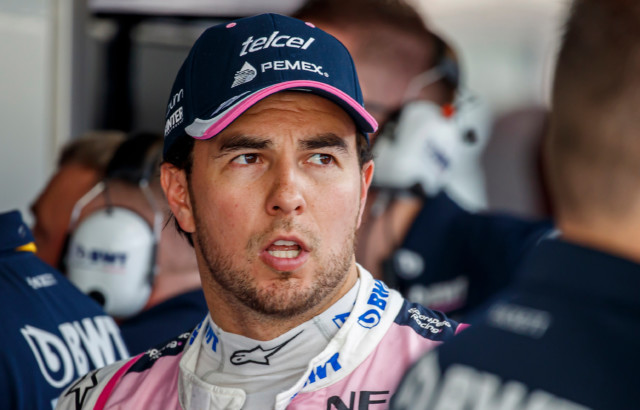 SERGIO PEREZ has tested positive for coronavirus and will miss this weekend’s British Grand Prix.

The Mexican, who drives for the Silverstone-based Racing Point team, has been placed into isolation, along with a handful of staff who he made contact with.

Perez will miss the British GP after contracting coronavirus

Perez, 30, took a pre-event test that was inconclusive but a second test on Thursday has confirmed the diagnosis.

The British GP will still go ahead as planned and the team are now weighing up who will replace him.

A statement from Racing Point said: “Following the announcement that Sergio has tested positive for COVID-19 at the Silverstone Circuit ahead of the Formula 1 Pirelli British Grand Prix, the team regrets to announce that he will be unable to participate in this weekend’s race.

“Sergio is physically well and in good spirits, but he will continue to self-isolate under the guidelines of the relevant public health authorities, with safety the ultimate priority for the team and the sport.

“The entire team wishes Sergio well and looks forward to welcoming him back into the cockpit soon.

“Our intention is to race two cars on Sunday. We will communicate the next steps for our British Grand Prix weekend in due course.”

Perez is the first driver to test positive since the sport returned on July 5 with a double-header in Austria and one race in Hungary.

The entire team wishes Sergio well and looks forward to welcoming him back into the cockpit of the RP20 soon. Our intention is to race two cars on Sunday. We will communicate the next steps for our British Grand Prix weekend in due course. [3/3] #F1 #BritishGP

Two-support staff tested positive in Budapest and were immediately isolated but Perez is the first from F1’s so-called “profile 1” category with access inside the paddock – with around 20,000 tests completed since the start of the season.

A joint statement from F1 and the FIA added: “Perez has entered self-quarantine in accordance with the instructions of the relevant public health authorities, and will continue to follow the procedure mandated by those authorities.

“With assistance of the local organiser of the British Grand Prix, local health authorities and the FIA COVID-19 delegate, a full track and trace initiative has been undertaken and all close contacts have been quarantined.

“The procedures set out by the FIA and Formula 1 have provided for swift containment of an incident that will have no wider impact on this weekend’s event.”

Racing Point will now weigh up who to replace Perez with.

They can call on Mercedes’ reserve drivers, Stoffel Vandoorne or Esteban Gutierrez.

Another option, which could also be the preferred choice, is to recall former F1 Nico Hulkenberg, who used to drive for the team under its previous guise, Force India.