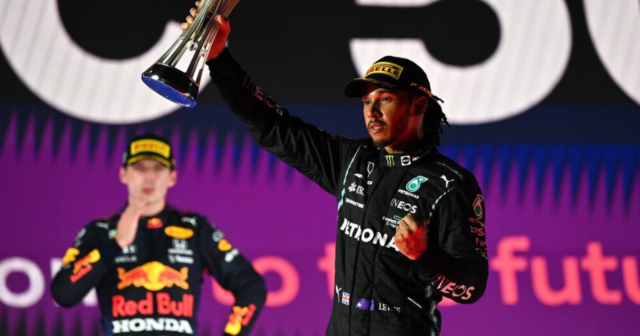 LEWIS HAMILTON labelled title rival Max Verstappen ‘f***ing crazy’ after crashing into the back of him during a remarkable Saudi Arabian Grand Prix.

Hamilton eventually passed Verstappen to claim the victory and move level on points with the Dutchman heading into the final race of the season in Abu Dhabi.

But the race, which included two separate red flags for various crashes, was littered with incidents – the most bizarre of which came on lap 37.

But as he slowed down to let Hamilton past. the Brit appeared confused and did not initially go past him.

Then when Hamilton drove up behind Verstappen he hit the back of the Red Bull – an incident the seven-time champion believes was caused by Verstappen brake-testing him.

In his post-race interview, he then added: “I don’t understand why he hit the brakes quite heavily so I ran into the back of him. It was a bit confusing.”

When asked about the incident, Verstappen responded: “I slowed down, I wanted to let him by.

“I was on the right but he didn’t want to overtake and we touched. I don’t really understand what happened there.

“It will be decided [at Abu Dhabi] hopefully we have a good weekend.”

Prior to that – when receiving the Driver of the Day accolade after the chequered flag – the 24-year-old said: “Luckily the fans have a clear mind about racing.

Following the incident, Verstappen was called to the stewards for an alleged Breach of Article 2 (d) Chapter IV Appendix L of the FIA International Sporting Code.

This says: “Causing a collision. Repetition of serious mistakes or the appearance of a lack of control over the car (such as leaving the track) will be reported to the Stewards and may entail the imposition of penalties up to and including the exclusion of any driver concerned.”

Hamilton and Verstappen have previously collided at the British and Italian Grands Prix.

The pair now head to Abu Dhabi level on points, with Verstappen leading only by virtue of having won more races – nine to Hamilton’s eight.