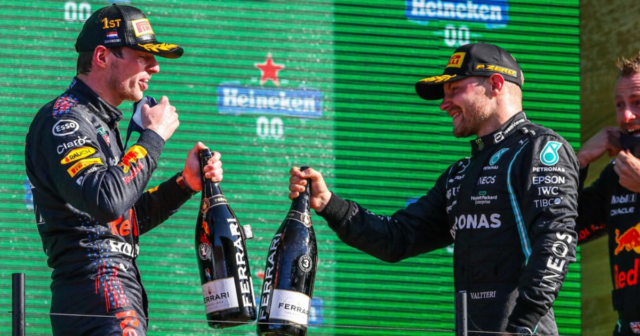 The Sky Sports expert has slammed race stewards for dishing out ‘harsh’ grid penalties to stars Max Verstappen and Valtteri Bottas in Qatar.

The pair were punished after they failed to slow as yellow flags were waved during qualifying at the Losail International Circuit.

That followed recent controversy over Verstappen’s move to block Lewis Hamilton in Brazil and questions over the legality of Mercedes’ car.

Brundle wrote in his Sky Sports column: “I thought the grid penalties for (Verstappen) and Valtteri Bottas were harsh on Sunday.

“The FIA, who do a generally tremendous job in refereeing the highly complex world of F1, have had a torrid and indecisive couple of weeks since waving through the infamous turn four incident between the championship contenders in Brazil.”

Red Bull’s Verstappen fought up from seventh on the grid to finish second at the inaugural Qatari event.

Qatar played host to a fiery atmosphere in the pit lane as frustrated team bosses made claims and counterclaims over recent incidents.

Mercedes were angry after being refused an appeal against Verstappen’s blocking tactics on their man at Interlagos.

Red Bull then threatened to complain about the legality of the lightning-fast Merc as boss Christian Horner claimed he had spotted a questionable rear wing.

And Verstappen was even fined for touching his rival’s car in Brazil – and then moaned about being denied a fair fight in the championship run-in.