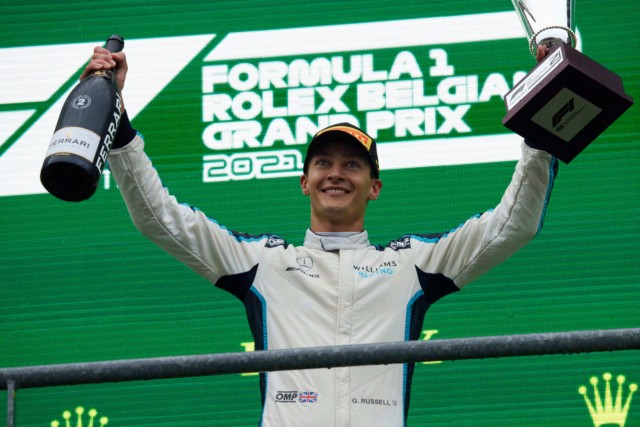 VALTTERI BOTTAS’s proposed move to Alfa Romeo is expected to be confirmed this week – paving the way for George Russell to join Mercedes.

Russell will become Lewis Hamilton’s team-mate for the 2022 season to create an all-British line up for the first time in F1 since 2012.

Russell, 23, was second in last weekend’s ill-fated Belgian Grand Prix, finishing ahead of Hamilton, who was third.

The racer from Kings Lynn won the GP3 title in 2017 and the Formula 2 championship the following year.

He has been on loan from Merc at Williams for the past three years, helping the team in their battle from the back of the grid.

However, he will now earn his promotion to the Brackley-based team where he will go up against Hamilton.

Last weekend, Merc boss Toto Wolff confirmed that a decision had been made regarding his driver pairing.

When quizzed on two occasions if he had made his decision, Wolff simply said ‘yes’.

“Both of them deserve being looked after in the best possible way because both of them are part of the family and we hold them up high.”

It is expected that Merc will first announce their intention not to re-sign Bottas, allowing Alfa Romeo to confirm his signing.

Bottas, 32, has won nine GPs but has not been on the top step of the podium for almost 12 months.

He will replace outgoing countryman Kimi Raikkonen, 41, who will leave Alfa Romeo, almost certainly bringing down the curtain on his F1 career.

Once Alfa have confirmed Bottas’s arrival, Merc will in turn confirm that Russell has signed a new deal with the team.