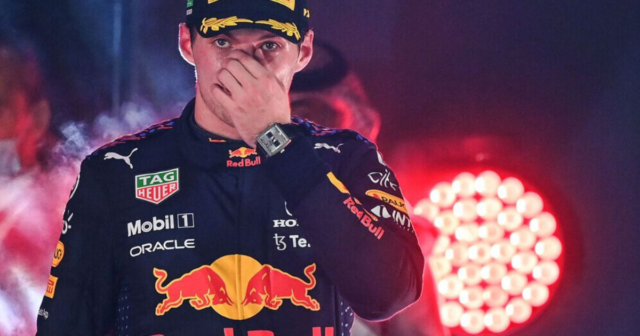 MAX VERSTAPPEN has been hit with a 10-second penalty after causing a crash with Lewis Hamilton at the Saudi Arabian GP.

The Red Bull ace was handed the time deduction by race stewards on Sunday night after colliding with his Mercedes rival on Lap 37.

However, Verstappen keeps his second-place finish after coming in 16 seconds faster than third-place Valtteri Bottas.

And it means he remains level with Hamilton going into next weekend’s final race with the title at stake.

But, after touching moments earlier when Hamilton attempted to pass Verstappen, the Dutchman then slowed down to let Hamilton past but the Brit appeared confused.

Then when Hamilton drove up behind Verstappen, he hit the back of the Red Bull – an incident the seven-time champion believes was caused by Verstappen brake-testing him.

Verstappen made his feelings on the incident clear when he stormed off the podium before the champagne bottles had been opened.

But Hamilton did not hold back when asked about the incident later on.

He said: “For me I really had to try and keep my cool out there which was really difficult to do.

“There were so many crazy curb walls and then he obviously brake-tested, Ithink to try and get the DRS into the last corner to overtake me again going into turn one.

“Does Max fall into that category… He is over the limit for sure. I have avoided collisions on so many occasions with the guy and I don’t know in his mind being the one who does that. But you fight to live another day which I did.”