Who is Valtteri Bottas’ girlfriend Tiffany Cromwell and why did F1 Mercedes star split with his ex-wife Emilia?
Advertisement 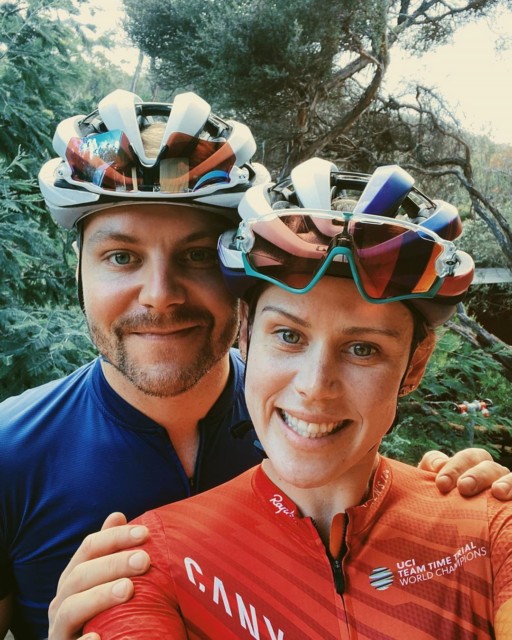 VALTTERI and Emilia Bottas shocked the racing world when they announced they would be divorcing.

The F1 driver made the announcement just days before the Abu Dhabi Grand Prix – the final race of the 2019 campaign.

But now the Mercedes racer is back in the fast lane of dating after confirming he is now with Tiffany Cromwell.

Who is Tiffany Cromwell?

The Aussie is a road cyclist, currently competing for Canyon-SRAM.

She often takes part in the Grand Tours, winning two stages of the Giro d’Italia Femminile in her career, while coming fifth at the UCI Road World Championships.

When did the pair start dating?

Valtteri Bottas confirmed his relationship with Tiffany, after posting a Valentine’s Day message with a photo of the pair.

Yet, having only separated with his ex-wife Emilia in November 2019, the F1 driver gestured towards future comments over his quick return to dating.

Bottas captioned the photo with the hashtag #hatersgonnahate.

His new girlfriend also made a nod to those that may be against their relationship, saying on her Instagram: “Happy Valentines Day to this amazing human being who completely understands me and always knows how to make me smile.

“My adventure buddy, training partner and coffee shop explorer @valtteribottas. So lucky to have found you. Can’t wait for all the adventures to come.

“And to whom it may concern… we’re happy and that’s all that matters to us.”

Happy Valentines Day to this amazing human being who completely understands me and always knows how to make me smile. My adventure buddy, training partner and coffee shop explorer @valtteribottas.

So lucky to have found you. Can’t wait for all the adventures to come.

Who is Bottas’ ex-wife?

Bombshell Emilia, who was born on October 11, 1992, is a Finnish swimmer who has smashed records in the pool.

As well as swimming, she is also a horse-riding enthusiast, and has taken part in a number of showjumping competitions.

It is no surprise that the blonde beauty has a number of endorsements under her belt, having starred in coconut water ads and for skincare brands.

In her first competition she was just 15 years old and competed in the 100m butterfly ranking 46th. 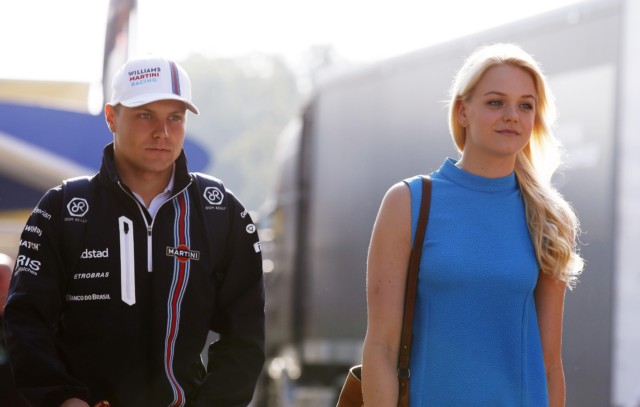 Emilia and racing driver Valtteri Bottas started dating back in 2010.

The pair tied the knot in September 2016 at St. John’s Church, Helsinki.

Last year she told MTV Finland that she was “not afraid” of Valtteri’s racing career, but was “aware of the risks” that came with the job. 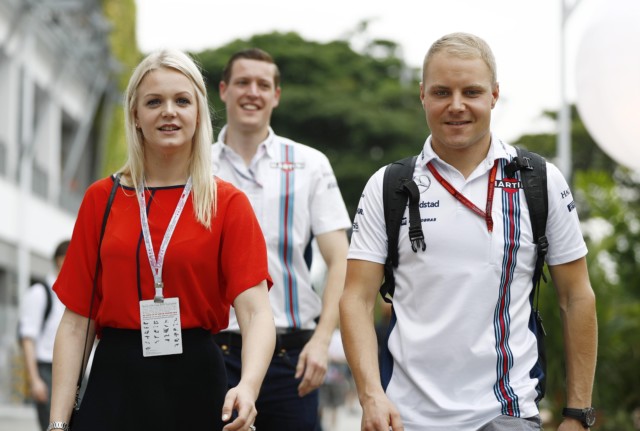 When did the Finnish couple split up?

Valtteri Bottas announced on social media on November 28, 2019, that the couple would be calling an end to their three-year marriage.

He posted a message on Twitter and Instagram, saying “our ways have split because of the challenges my career and life situation bring”.

Bottas will be away for 22 race weekends in 2020, while the Mercedes F1 team are based in Brackley, Northamptonshire.

The Finn’s Silver Arrows teammate Lewis Hamilton has sympathised with his struggles to keep his relationship going, after revealing that he has trouble trying to keep his dogs alive.

The Brit said: “Children aren’t on my agenda at the moment. Congratulations to Seb, he’s obviously a great father.

“But I am struggling to keep my dogs alive and, managing being an uncle at the moment, that’s hard as it is, so I’ve got my hands tied.

“It’s similar to most sportsmen and women.

“It may be slightly different in that we are travelling as much as we are, and you are just away for crazy amounts of time.

“So that’s probably an additional weight that makes it really, really tough to hold down a good relationship, and if things aren’t quite perfect.”

Hamilton has not been in a relationship since splitting with Nicole Scherzinger in February 2015. 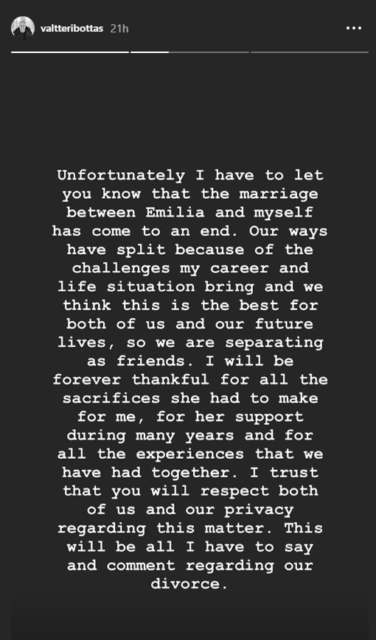 Valtteri Bottas announced he will be splitting with his wife on Instagram and Twitter
Advertisement. Scroll to continue reading.
In this article:Abu Dhabi, abudhabi, fastlane, grandprix, Hamilton