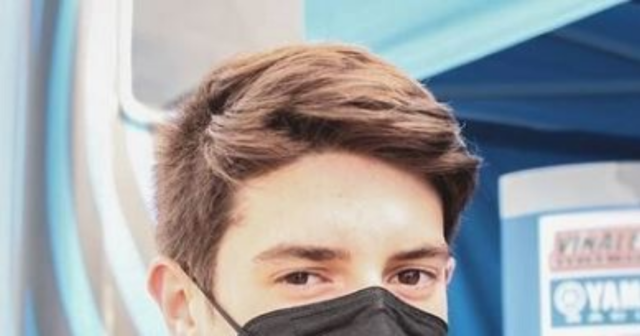 The teen was taking part in today’s opening race of the Motul Spanish Round in the FIM Supersport 300 World Championships when the tragedy unfolded.

A statement from WorldSBK read: “We’re deeply saddened to report the loss of Dean Berta Viñales.

“The WorldSBK family sends love to his family, loved ones, and his team. Your personality, enthusiasm, and commitment will be hugely missed.

“The whole motorcycle racing world will miss you, Dean. Ride in Peace.”

Dean was on lap 11 of the championships when he suffered severe head and spinal injuries in the crash involving four other riders.

Paramedics rushed on to the track after the race was stopped and the rider was transferred to a medical centre on site.

The statement continued: “Berta Viñales was enjoying a recent run of good form in his rookie season in the FIM Supersport 300 World Championship, claiming a best of fourth place at Magny-Cours in Race 2.

“And backing it up with sixth in Barcelona-Catalunya Race 2, having set the fastest lap in Race 1.

“He was showing great potential during the Motul Spanish Round, in the leading group and starting from his best Superpole result of tenth.”

Kawasaki rider Jeffrey Buis was declared the winner based on the results of the last completed lap.

The race was stopped after the horror crash

Did you miss our previous article…
https://www.sportingexcitement.com/formula-1/lewis-hamilton-crashes-into-pit-wall-and-damages-car-as-lando-norris-takes-shock-pole-for-russian-grand-prix