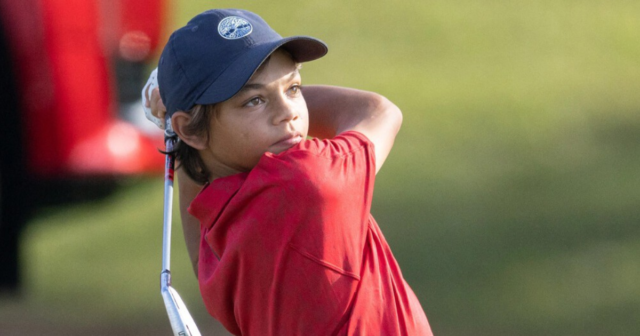 THEY say like father like son, but in the case of Charlie and Tiger Woods the resemblance on the course is uncanny.

The pair teamed up at the PNC Championship that pits parents and their offspring together for the second-year running.

Focused Charlie Woods, 12, stole the show at the PNC ChampionshipCharlie was the star of the tournament, despite the focus being on dad Tiger’s return to golf

It was supposed to be about Tiger’s return to the golf world, just 10 months after a horror car crash left him bed-ridden.

Instead, it was 12-year-old Charlie who stole the show – outshining his famous dad with an incredible display that wowed fans.

And even though they finished runners-up to John Daly and his son Little John, in Charlie it was clear a star was born.

It was said last year that Charlie was a golf prodigy like his dad.

Of course, it’s in his blood given his father is who he is, while Tiger’s niece Cheyenne Woods is also a pro.

His caddie for that occasion was none-other-than his old man. 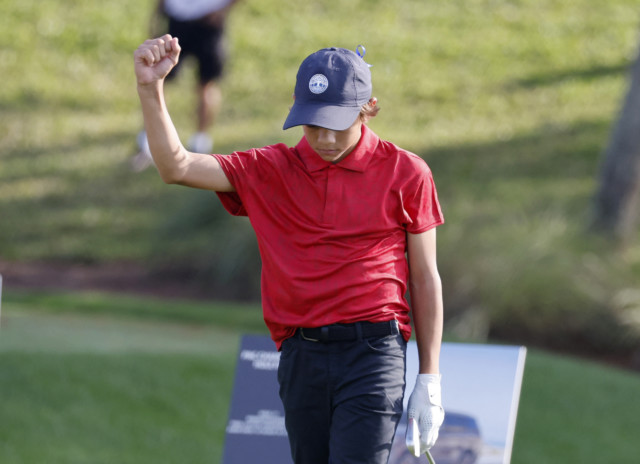 Since 2020, Charlie Woods has been in the public eye winning junior tournaments 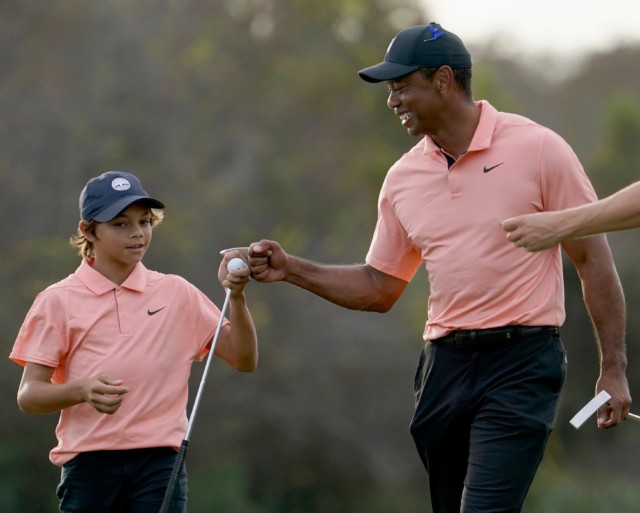 Armed with tips from dad Tiger, Charlie Woods is a chip off the old block

When Charlie burst onto the scene last year, one thing was for certain. He carried the same mannerisms as his dad.

From the club twirling to the same fist-pump, mini Tiger appeared a chip off the old block. Even their swing looks the same.

Tutelage from his father has helped, while Justin Thomas’s dad Mike has also provided some sage advice.

Although Charlie’s handicap is unknown, it is believed to be somewhere in the scratch mark.

Some betting companies are already reportedly taking bets on whether he could win a Major by the age of 22 – with odds at 1500-1.

Considering Tiger won the 1997 Masters at 21, that might just be worth a flutter. 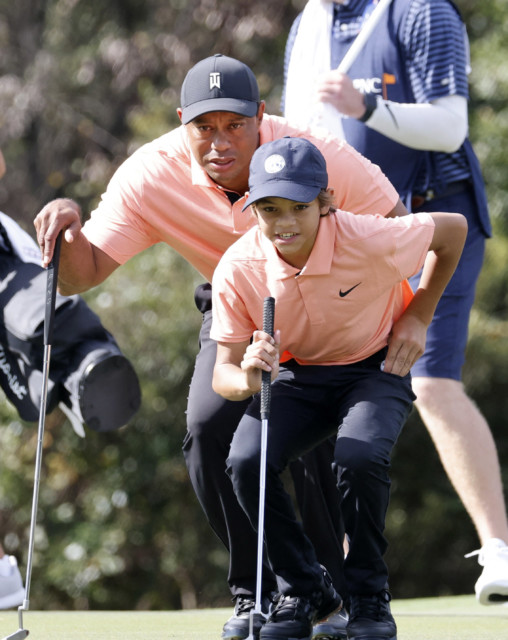 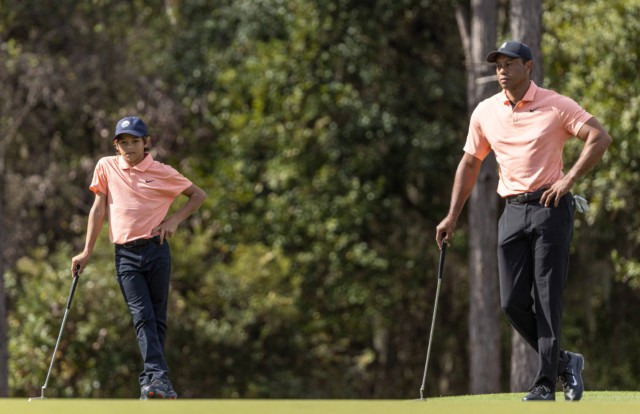 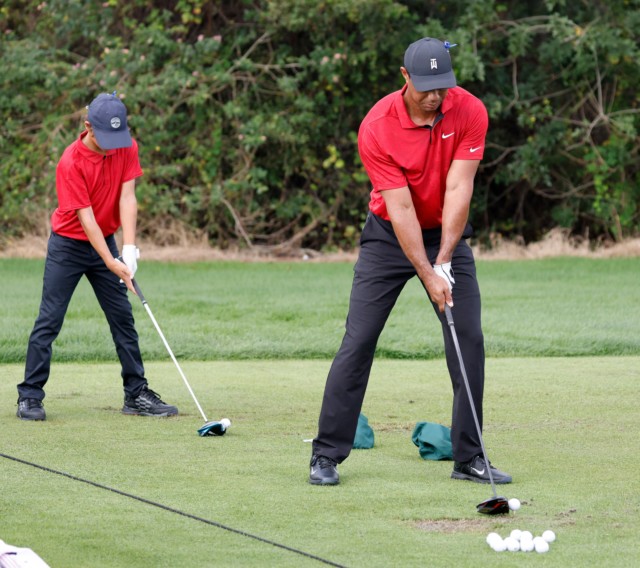 This year has been a traumatic one for the Woods family.

Tiger may have survived a horrific car accident in Los Angeles back in February, but the future of his professional golf career is still uncertain.

He admitted he was lucky not to lose a limb in the crash, and it was evident he’s still recovering as he grimaced around the course of the Ritz-Carlton Golf Club in Orlando, Florida.

But what was also evident was how Charlie’s game has improved since last year’s PNC Championship appearance.

Before the tournament, he enlisted the help of putting guru Brad Faxon to aid his game. A progression certainly showed.

The Woods’ set a tournament record with an astonishing 11 birdies in a row in the final round.

And not once did Charlie allow himself to be distracted by the cheers and the furore around him.

He remained focused and showed a tunnelled-vision demeanour reminiscent of his dad.

Some of the shots he pulled off – clutch putts, bomb drives, and laser approaches showed he has plenty of variety to his game already. 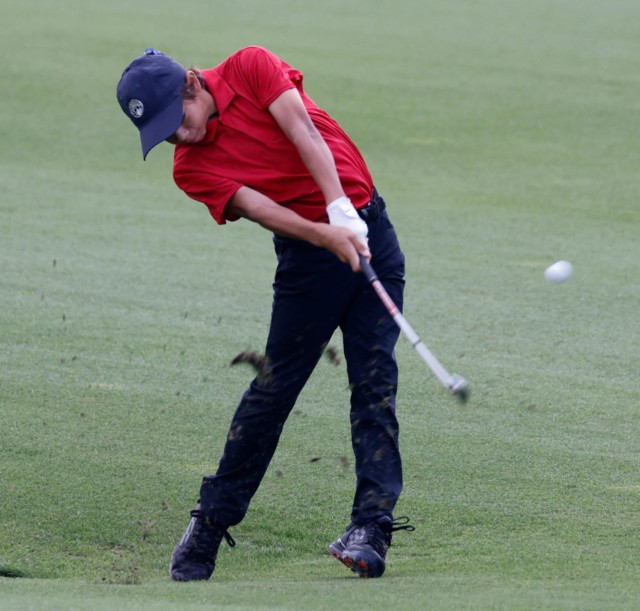 Charlie Woods has already mastered a variety of shots 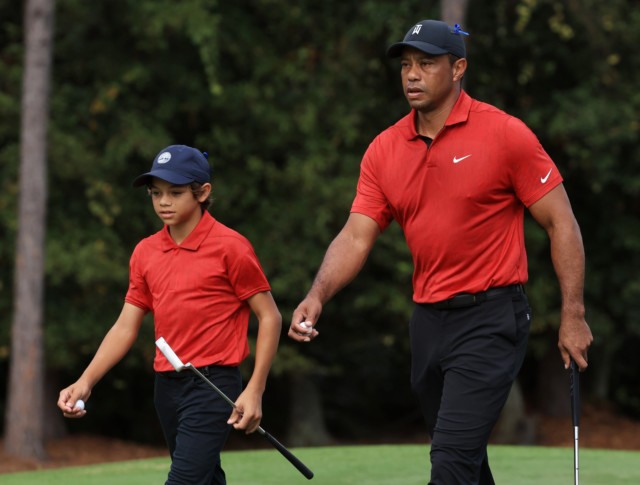 Aged just 12, Charlie Woods is set to follow in the footsteps of father Tiger

By the end of Sunday, they finished in second place on 25 under par to John Daly and his son by two strokes.

Afterwards, Tiger admitted: “I’m just happy, thankful, that I’m able to do this.”

But the day really belonged to Charlie, the pre-teen wonderkid who seems destined for the PGA Tour.