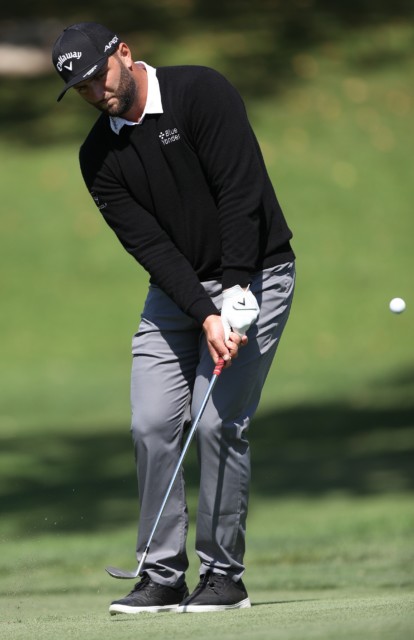 RYDER CUP star Jon Rahm revealed he was born with a club foot and needed every to have every bone in his ankle broken to fix it.

The 26-year-old has risen to the top of the men’s game and will lead Europe’s charge against USA at Whistling Straits at the weekend.

Jon Rahm revealed he was born with a club foot

He became world No1 last summer and won his first major in dramatic style at the US Open earlier this year.

But the Spanish golfer had to battle a crippling injury and even changed his golf swing to accommodate.

Rahm said: “I was born with a club foot on my right leg, which means for anybody that’s sensitive about that, my right leg up to the ankle was straight, my foot was 90 degrees turned inside and basically upside down.

“So when I was born, they pretty much broke every bone in the ankle and I was casted within 20 minutes of being born from the knee down.

“I think every week I had to go back to the hospital to get recasted, so from my knee down, my leg didn’t grow at the same rate.

“So I have very limited ankle mobility in my right leg. It’s a centimetre-and-a-half shorter, as well.

“So what I mean by limitations is I didn’t take a full swing because my right ankle doesn’t have the mobility or stability to take it.”

Rahm continued: “I learned at a very young age that I’m going to be more efficient at creating power and be consistent from a short swing.

“If I take a full to parallel, yeah, it might create more speed, but I have no stability. My ankle just can’t take it.

“Also, my wrists don’t have much mobility, that’s why I also naturally turn to bow my wrist to create power in every single sport I do.

“So that’s why, in my swing, I bow my wrist and that’s how I hit it. It’s little things that I think a lot of people can learn.

“Let your body dictate how you can swing. Simple as that.”

Rahm and Europe will be looking to retain the Ryder Cup they won three years ago in Paris.

This year’s showdown with the American team in Wisconsin begins on Friday having been postponed from last September due to Covid.