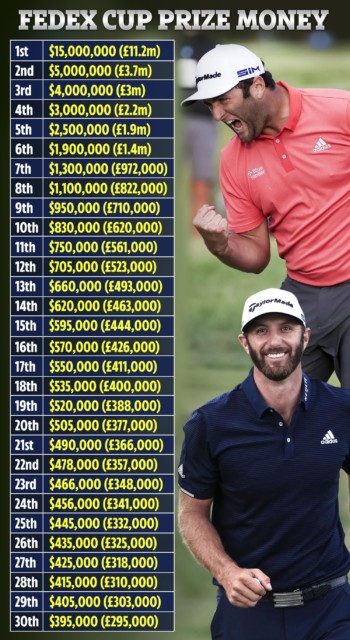 DUSTIN JOHNSON and Jon Rahm will battle it out for the biggest cheque in golf at the TOUR Championship.

The monster-hitting American and red-hot Spaniard will go head to head for a whopping $15MILLION (£11.2m).

But world No 1 Johnson, 36, will have a huge advantage at East Lake Golf Club in Georgia, US – because he will start the tournament already two shots ahead of Rahm.

That is how PGA Tour bosses have decided the season-ender will play out so it remains dramatic down to the final putt – in theory.

Johnson will start the tournament on 10 under as a reward for finishing the season top of the season-long FedEx Cup rankings.

Rahm, 25, who beat Johnson with a thrilling 66ft putt on the first play-off hole of the BMW Championship last week, will start on eight under.

That is because he finished second in the rankings ahead of this week’s finale.

The system goes all the way down to numbers 26-30 in the list, who will start on level par. 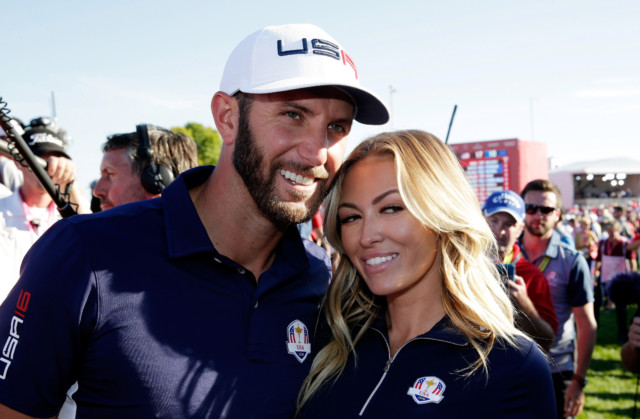 Whoever wins the TOUR Championship will also win the FedEx Cup – and its incredible riches.

The FedEx Cup bonus pool is a whopping $60m – an amazing guaranteed figure given the global economic downturn suffered as a result of coronavirus.

But he has said he will skip the tournament at the drop of a hat should his wife Erica go into labour with their first child.

Last season, McIlroy beat Justin Thomas (third going into this week) despite starting the tournament five shots behind him.

The rigged scoring system – totally unique to this event – should make for a thrilling finale, especially with so much cash on the line.

The field is set.
The leaderboard is set too.

And only the bank manager will have as big a smile on their face when the battle finishes on Sunday night.

But golf’s biggest earner Tiger Woods, who won the TOUR Championship in 2018 ahead of his 2019 Masters triumph, will not play because he did not qualify.

The 15-time Major champ – who uses a putter worth £70m – finished 63rd in the points race, with only the top 30 playing this week.