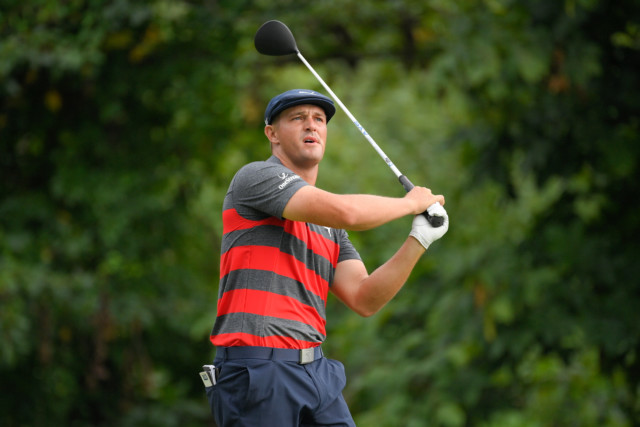 GOLF bosses have vowed to crack down on the Bryson-baiters, with warnings that big-mouthed fans will be kicked off the course.

Bryson DeChambeau snapped after the latest dig over his feud with Brooks Koepka, telling a fan who yelled ‘Good job Brooksie” following his play-off defeat at the BMW Championship to “get the f*** out of here”.

Some fans have targeted Bryson DeChambeau in recent months

Monahan said: “We have seen issues as of late across the sports landscape where the pent-up demand for live sport plays out in an ugly way.

“Golf is not immune from unfortunate and disruptive behavior, although I would say that we do have the very best fans in the world. This is about just a few bad actors.

“But in some situations it’s apparent that we have gotten away from the very civility and respect that are hallmarks to our great game.

“So we plan to introduce a code of conduct that recognises by coming to a PGA Tour event, you’re expected to contribute to a welcoming and safe environment by refraining from and reporting any unsafe, disruptive, or harassing behavior.

“Comments or gestures that undermine the inclusive and welcoming nature of the game will not be tolerated, nor will any harassment of players, caddies, volunteers, officials, staff, or other spectators.

“The barometer that we are all using is the word ‘respect’ – and to me, when you hear “Brooksie” yelled, or you hear any expression yelled, the question is, is that respectful or disrespectful?

“That has been going on for an extended period of time. To me, at this point, it’s disrespectful, and that’s the kind of behavior that we’re not going to tolerate going forward.

“Fans who breach our code of conduct are subject to expulsion from the tournament and loss of their credential or ticket.”

Monahan was unable to say whether the crackdown will also apply to the Ryder Cup at the end of this month, as that event is run by the PGA of America, not the Tour.

But players who have to put up with a few sly digs will be even more handsomely compensated next year.

Monahan revealed official prize money would rise by £25million in 2022, to a staggering £460m – further proof that while the European Tour has had to tighten its belt, golf in the States has managed to shrug off the effects of coronavirus quicker than any other sport.