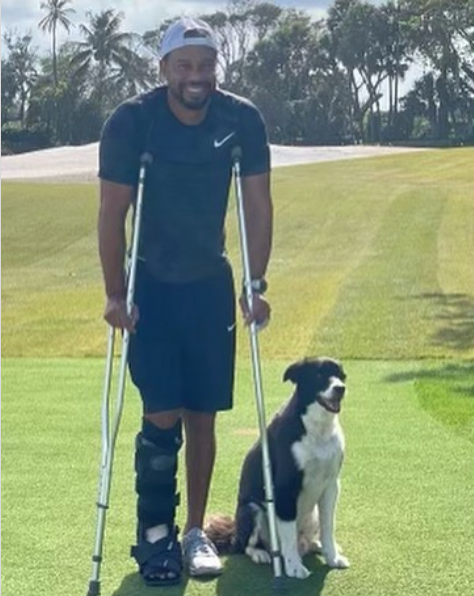 TIGER WOODS has revealed his road to recovery as he posted a picture in a leg brace with his dog.

The golf legend sustained serious injuries in a horror car accident in February and with fears over the American’s playing future.

Woods later had successful surgery on his legs to repair his grisly injuries.

And he was released from hospital on March 16 and has been recovering at home since, though his exact current condition is unknown.

But Woods, 45, gave fans and update on his Instagram and was all smiles with one of his two beloved dogs.

He captioned the post: “My course is coming along faster than I am. But it’s nice to have a faithful rehab partner, man’s best friend.”

Woods injured both of his legs severely when the car he was driving careered down a hillside in Los Angeles.

The sporting icon is expected to spend much of the year rehabilitating his injuries.

But he has the full support of his on-course rivals and friends.

Rory McIlroy went to visit his pal at his home recently and reported that Woods was in ‘decent spirits’.

“When you hear of these things and you look at the car and you see the crash, you think he’s going to be in a hospital bed for six months.

Justin Thomas also visited Woods and said that the golfer texted him saying: “It’s starting to kick in now – wish I was there.”