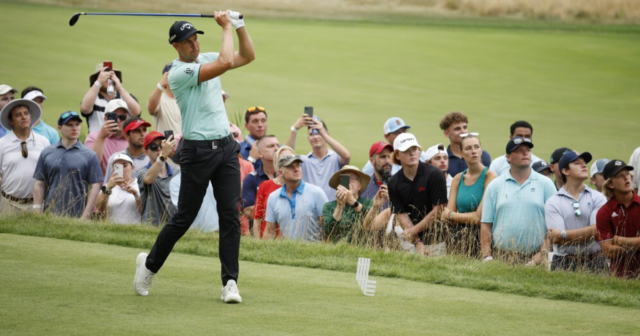 HENRIK STENSON could not resist having a pop at Ryder Cup chiefs after his £3.3million LIV tour event win.

The Swedish star was stripped of his Team Europe captaincy last week after joining the golf’s new Saudi-backed rebel circuit.

But the 46-year-old looked like he had made his peace with his decision after collecting his LIV debut winnings at the Trump National Golf Club in New Jersey.

That will be added to the £40m he received to break his Ryder Cup contract.

And it means Stenson now has the sort of earning potential which is seeing more and more top players join Greg Norman’s controversial new enterprise.

Englishman Luke Donald is reported to be lined up as the next Ryder Cup skipper and Stenson took his opportunity in front of the media to take a swipe at his former European bosses.

He told reporters: “I guess we can agree I played like a captain.”

He added: “It’s been a good first week, obviously.

“It’s been a busy ten days and I’m extremely proud that I managed to focus as well as I did.

“It was a little wobbly coming home here, we haven’t finished a deal in a couple years with any wins.”

Four months ago he was announced as Ryder Cup Europe captain for next year at Marco Simone Golf and Country Club in Rome.

But last week he became front-and-centre in golf’s new culture war by saying he disagreed with the decision to stand him down after his defection to LIV.