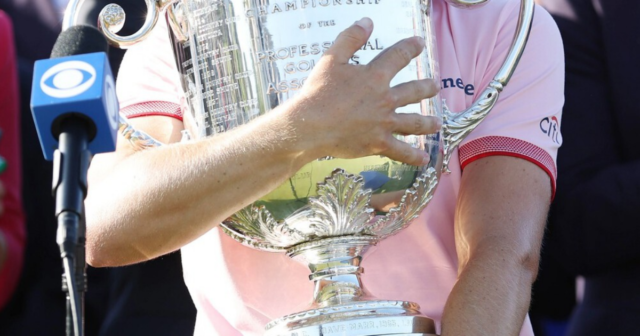 Justin Thomas came hurtling out of the pack to claim his second Major title after Mito Pereira’s final-hole heartbreak sent the PGA Championship into a three hole play-off.

Pereira’s double bogey at the 72nd hole wiped out his one-shot lead, and left Thomas and fellow American Will Zalatoris to go toe-to-toe for the title. 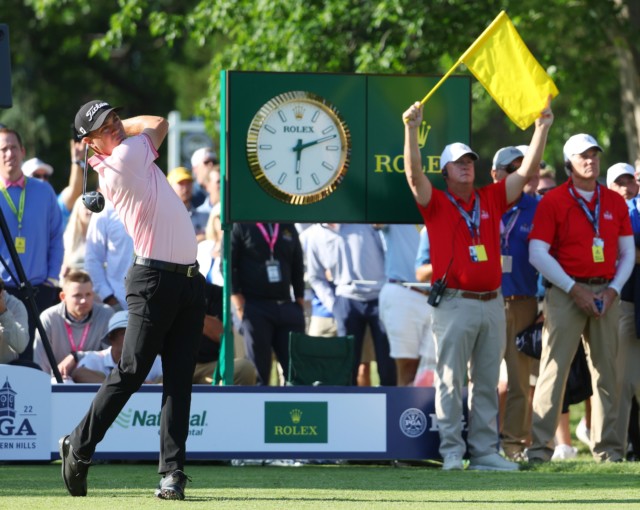 The American edged out Will Zalatoris in a playoff in Oklahoma 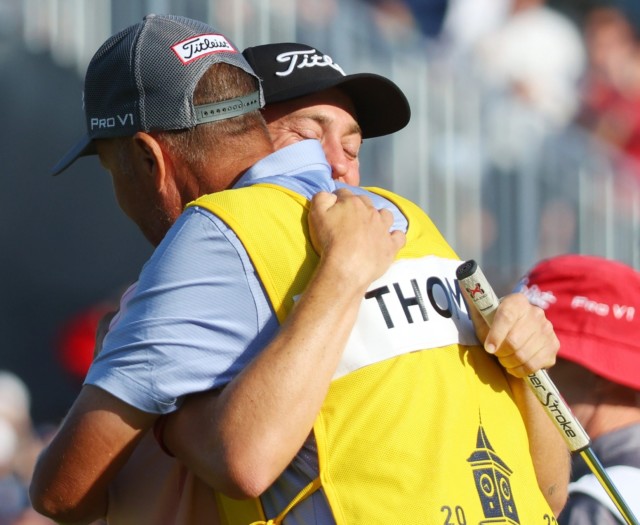 And he hugged his caddie Jim ‘Bones’ Mackay after the victory

It was not a fair fight, with 2017 champion Thomas bullying a man who is still seeking his first PGA Tour win, although this was Zalatoris’ second runner-up finish in the Majors – he was second to Hideki Matsuyama in last year’s Masters.

Both men birdied the first extra hole, the par five 13th, but it was advantage Thomas when the former world No 1 knocked his drive onto the green at the 302 yards par four 17th.

Zalatoris missed the green and could not match his rival’s two-putt birdie. Matching pars at the last confirmed Thomas, 29, as a multiple Major winner.

Thomas, 29, started the final round seven shots off the lead. He became only the sixth player to overturn a deficit of that size, and equalled the record comeback in the PGA. 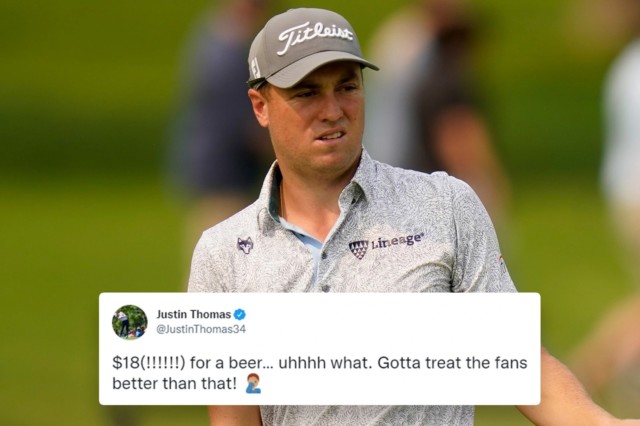 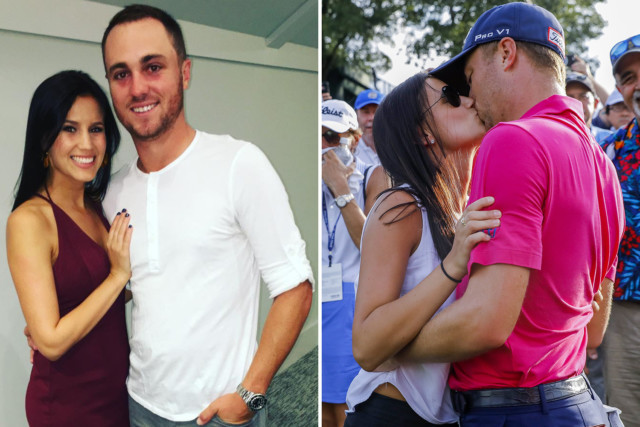 But it was impossible not to feel sorry for Pereira.

The man from Chile only needed to make par at the final hole to become the first South American golfer to win the USPGA, despite seeing the three-shot lead he took into the final round whittled down to just one.

But he stared in disbelief as he carved his final tee shot into the creek zig-zagging along the side of the final fairway.

The best he could do from there was a six, dropping him into a share of third with Cameron Young – and his expression told you it will take Pereira a while to get over this crushing blow.

As he signed his card, the Santiago golfer held his head in his hands, and fought back tears.

Just a few minutes earlier he must have been imagining how it would feel to have the giant Wanamaker Trophy in those hands.

Hats off to Thomas, but this nerve-shredding Southern Hills shootout will be remembered as the one that got away from the world’s 100th ranked golfer.

Pereira did not make it easy for himself, but he seemed to have all the answers until that shocker on the 18th tee.

His overnight lead had been wiped out by the time Zalatoris walked off the fifth green in the penultimate group, after posting back-to-back birdies.

With Pereira playing the first four holes in one over he was tied with the American at eight under par – but within two holes he was three ahead again! 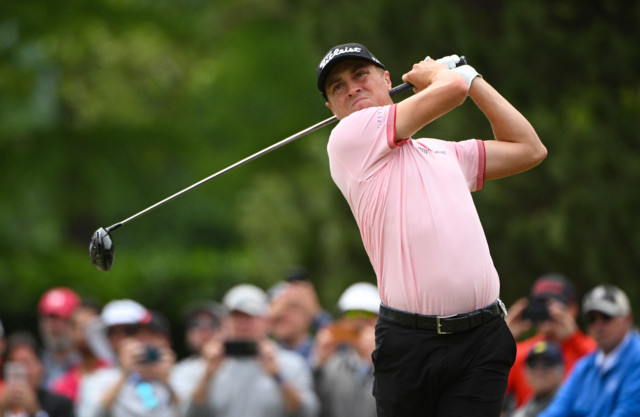 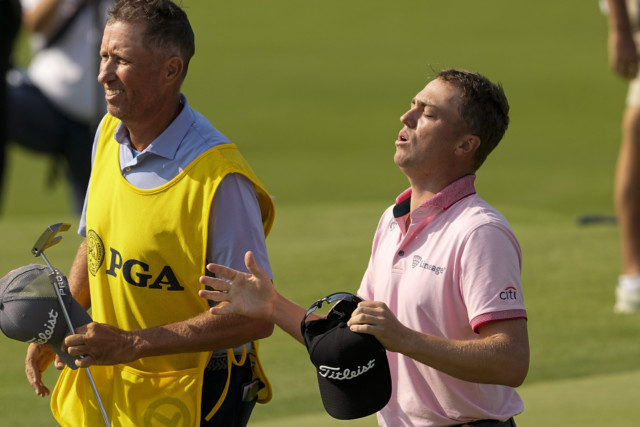 The to-ing and fro-ing continued over a frantic closing stretch, with Fitzpatrick desperately clinging on at five under.

But he was finding birdies hard to come by, and a clumsy bogey at the tenth dropped him to two over for the round.

And when another shot went at 11, his chance of becoming the first Englishman to win the PGA since Jim Barnes’ second victory 102 years ago had gone.

Tommy Fleetwood might have claimed that honour if he had shown the same sparkle he displayed over the weekend a bit earlier in the tournament.

Fleetwood followed up a third round 69 by bagging SEVEN birdies in a final round charge – the only problem was they sandwiched four bogeys in a row from the seventh.

But his closing 67 still matched the best round of the day, and a share of fifth place at three under signalled a welcome return to form for the former Ryder Cup hero. 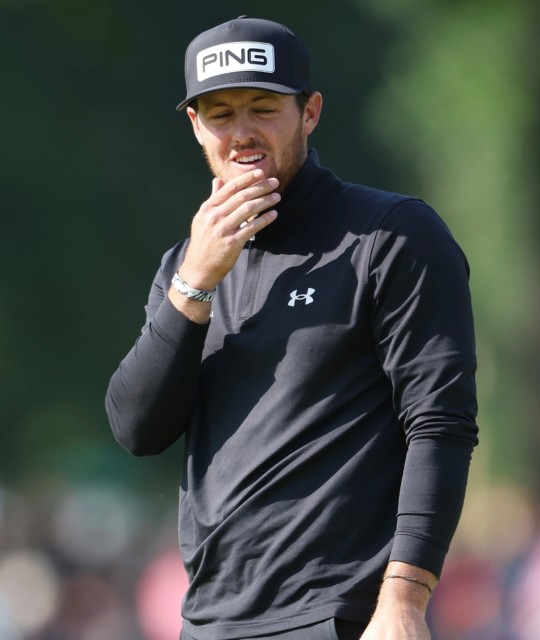 The leaders’ final round struggles must have made Rory McIlroy even more mad at himself, as he was at it again in the final round – showing he is easily the best no-pressure golfer in the game.

McIlroy started out nine shots behind 54 hole Pereira, in a share of 17th place. But he came racing out of the blocks like a thief with a handbag!

The four-time Major champion rattled off four birdies in a row from the second to charge up into a share of fifth place, and one or two more birdies would have had the leaders glancing nervously into the rear view mirror.

But a bogey at the sixth sucked all the swagger out of him, and he eventually signed for a two under par 68th – good enough for yet another back door top ten, disguising his latest sub-standard performance.