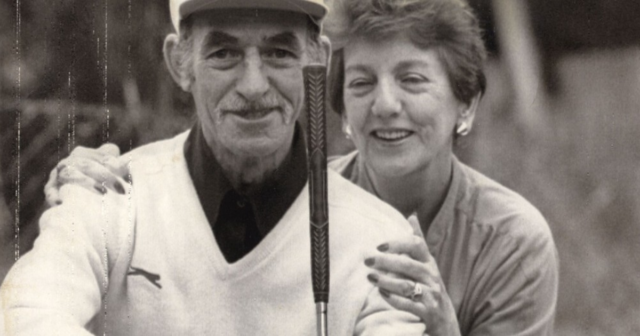 AS unknown golfer Maurice Flitcroft teed up his ball to take a tilt at the sport’s most eminent tournament, something was clearly amiss.

Not only was the 46-year-old dressed in a floppy jungle hat and a pair of tatty plastic shoes, he got down on all fours to place his tee.

The ‘Phantom of the Open’ Maurice Flitcroft, with his wife Jean, was teeing off at the Open despite never having played a round of golf 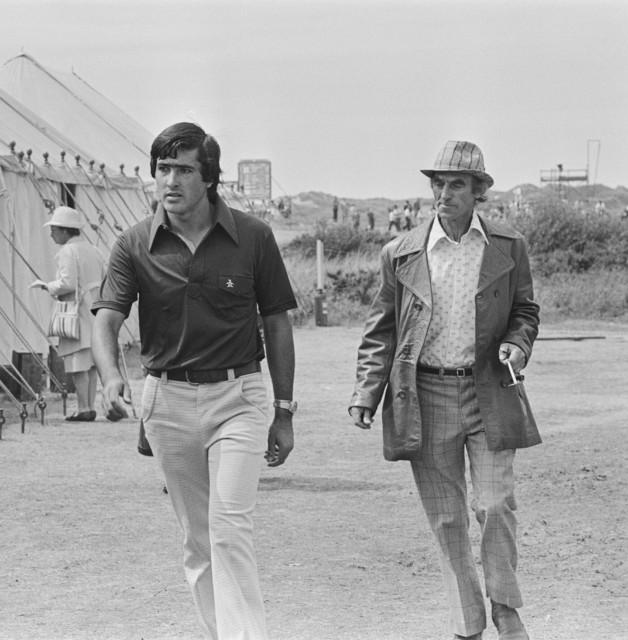 Maurice pictured strolling along behind Seve Ballesteros at the Open

After posing as a professional player to enter an elite qualifying competition for the British Open of 1976, Maurice lined up his first drive and took a clumsy swing at his ball — sending it a miserable 40 yards.

His shots did not improve, as he blasted into bushes and skewed simple putts.

By the time he was halfway round the course, red-faced officials were urgently trying to persuade Maurice to retire gracefully.

It turned out he was not the gifted player he had claimed to be.

Instead, he was a shipyard worker who had never been round a golf course in his life — practising instead in muddy fields and on a local beach.

But the chain-smoking imposter was not about to give up on his dream of lifting the tournament’s famous Claret Jug trophy when the event was held that year at Southport’s Royal Birkdale Golf Club.

That was the year 19-year-old Spanish prodigy Seve Ballesteros announced himself to the world by finishing joint-second behind US great Johnny Miller.

As for mischievous Maurice, he bombed out of qualifying after an 18-hole score of 121 at Merseyside’s Formby Golf Club — a disastrous 49 OVER PAR and the worst round in British Open history.

Failed to hole a putt

But his son James, 59, tells SE that Maurice was not one to throw in the towel, saying: “One of his problems was that he wouldn’t give up. On anything.

“Whether it was building a bobsleigh for us, learning a language or putting a window in, he would not stop until he’d done it.

“So for them to ask him to retire was out of the question.

“He’d paid his money so he wanted his money’s worth.”

He was dubbed “the world’s worst golfer” and made headlines around the world.

The eccentric amateur later failed to hole a single putt when he appeared on a mock mini-course for daytime TV, complaining that the studio floor under the indoor green was uneven.

A tournament was even established in his name in the United States, celebrating effort over ability.

Now Sir Mark Rylance is portraying Maurice, who died in 2007 aged 77, in new film The Phantom Of The Open which mines the have-a-go hoaxer’s comical character for all it is worth.

Indeed, his is not a story that ended with that ignominious Open defeat.

Even though tournament bosses The Royal And Ancient, based in Scotland at the “home of golf” St Andrews, banned him from ever competing again, Maurice kept trying to enter the Open and other pro tournaments around the world under a series of comedy pseudonyms. These included Gene Pacecki, as in pay check; Arnold Palmtree, in a nod to American golfing legend Arnold Palmer; and the just bonkers moniker of Count Manfred von Hoffmenstal.

“My brother Philip lived in Switzerland, so he would send an entry form for Dad from there and he also had an American pal who would do the same.” But Maurice was regularly chased off courses in his deerstalker hat, and threatened with arrest.

In desperation, Royal And Ancient secretary Keith Mackenzie — played by Notting Hill actor Rhys Ifans in the new film — employed a handwriting expert in an attempt to flush out the fake applications.

But golf was a passion for Maurice — and it was James and his twin brother Gene’s interest in the sport which first sparked it.

James says: “We took up golf when we were ten or 11. Our dad bought us clubs. If we wanted cricket we had pads, balls, wickets. It was the same with golf clubs.

“He quite liked the idea when he saw us cleaning them and practising with our mates. The next minute he’s got himself a set of clubs and is practising every day.”

But the family’s income did not stretch to golf club membership.

Maurice worked as a crane operator with shipbuilders Vickers-Armstrongs in Barrow-in-Furness, Cumbria, and his wife Jean — who died in 2002 — was part of the secretarial staff there.

Undeterred, Maurice practised hitting balls along his local beach, in the park, on school grounds and sometimes by sneaking on to courses at night. James says: “He was fined for playing on the grammar school field, about a 100 yards away from where we lived.”

Maurice’s twin sons had no idea their dad was taking part in the British Open qualifying during the summer of 1976 — and neither did his employers. He had told his bosses he was ill, so it came as a great surprise to them to see photos of him strolling along behind Seve Ballesteros at the Open — after failing to qualify,

Maurice had turned up to watch and got close enough to Seve to be photographed with him.

James adds: “One weekend he went away and we didn’t think anything of it. Then on the Saturday SE had a banner headline that Maurice Flitcroft shot 121 in the Open.

“We were about 12. We didn’t grasp how immense it was until we got to school on the Monday morning.”

While the brothers took a fair amount of ribbing, it was far worse for Maurice — who was given his marching orders from work.

James says: “They realised he wasn’t sick when they saw him in the paper. He lost his job, Mum went to work and he looked after us. He was one of the first house-husbands.”

Local golfing bigwigs were also none too pleased about Maurice having shown up the sport, and promptly blackballed him.

Former tailor and jeweller James says: “Because of what he’d done, he virtually made himself unemployable.

“There was a stigma attached to what happened at the golf.

“We were annoyed about that growing up. It probably affected some of our job prospects when we left school. Most of the management played golf. The powers that be.” But none of that was going to deter determined Maurice, who had the support of his family and many in the community.

James says: “My mates’ dads would say to us, ‘Well done to your dad for what he did’.”

Both Gene, who died in 2010, and James joined him on his capers up and down the land, sometimes acting as his caddy.

James recalls his dad once pitching a tent at Scotland’s prestigious Gullane golf course, in East Lothian, only to later realise they were in the middle of the car park.

But James did not always like caddying because it often meant facing furious officials when Maurice had been rumbled.

He recalls with a smile: “I wasn’t keen on the confrontation — but Dad revelled in it.”

Indeed, Maurice played up to the attention of the Press.

After the 1976 Open, with his dentures missing, he told photographers: “I’ll see you next year, fellas” — and praised the course putting greens because “they resemble my living room carpet which I practise on every night”.

The twins inherited their dad’s sense of dedication — James and Gene loved dancing and went on to become world disco champions.

Even though Maurice talked golf all the time, he never had complaints from wife Jean, played by Paddington actress Sally Hawkins in the movie. “They were an old-fashioned couple,” James says: “They supported each other in every endeavour.

By 1992, Maurice had developed a hip problem which finally convinced him to pack away his golf clubs.

The sporting world might have treated him as a joke but he had wanted to become a great golfer.

James insists he reached the standard of a decent club player and certainly was NOT the world’s worst.

He says: “Dad took it seriously — deadly serious. ‘Go for it, what the hell! Who cares?’ — that was the family attitude. We have kept that throughout life. You have got to do hare-­brained things.” 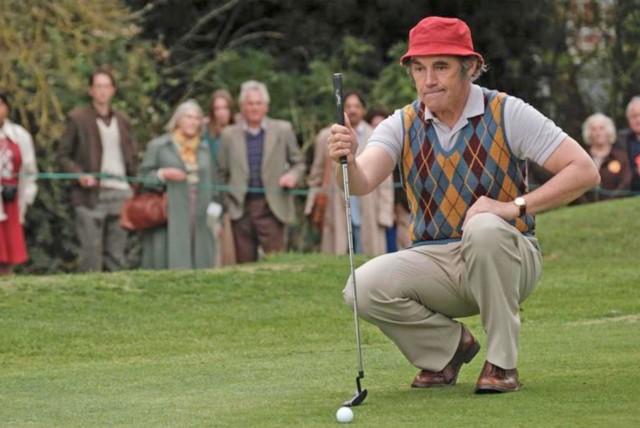 Actor Mark Rylance lines up as shot as Maurice 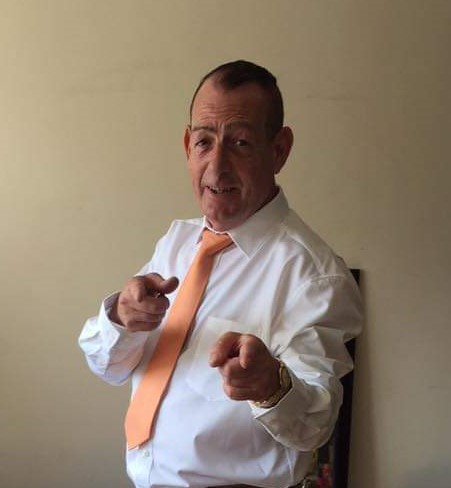 The imposter’s son James, 59, tells SE that Maurice was not one to throw in the towel 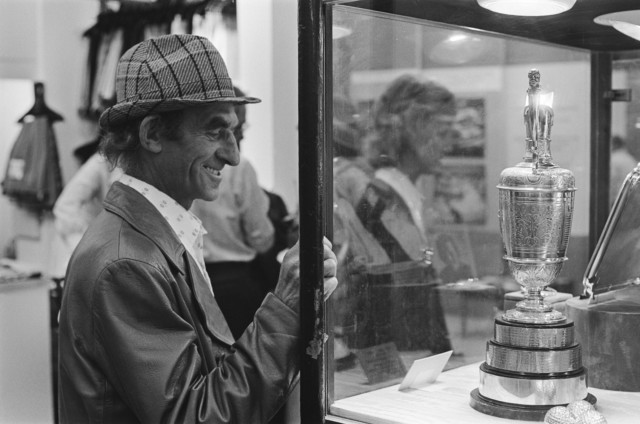 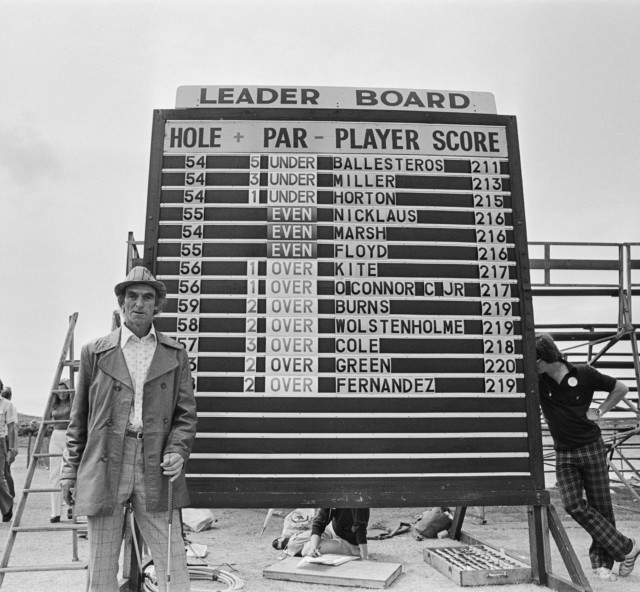 Maurice never made it onto the leaderboard 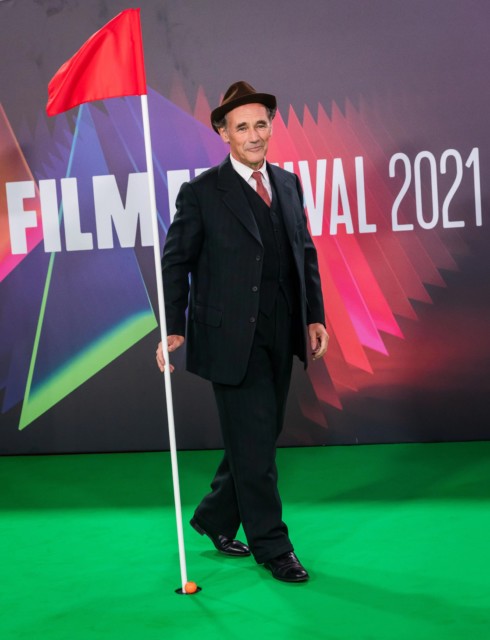 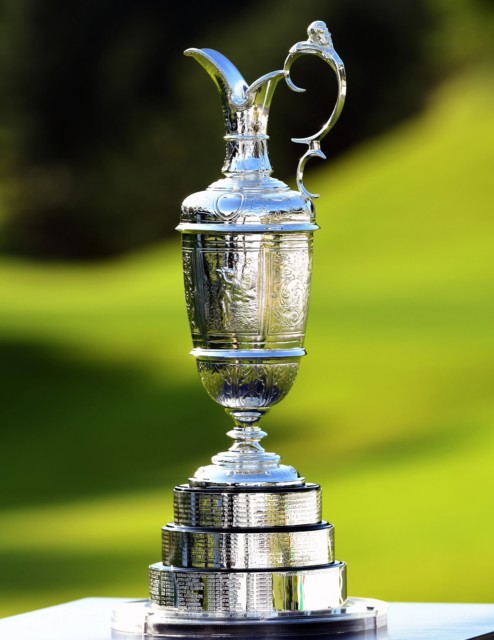 The famous trophy is missing the name Maurice Flitcroft