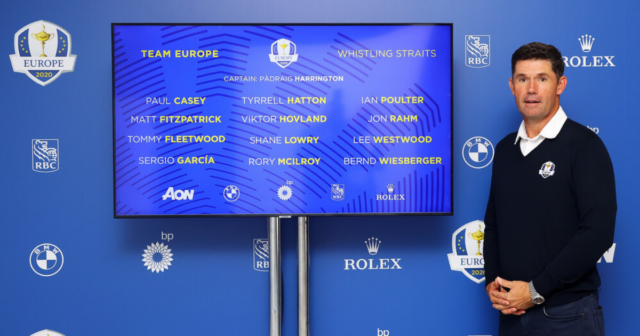 PADRAIG HARRINGTON has revealed he would have handed Bernd Wiesberger a wild card ahead of Justin Rose, if it had come down to a straight scrap between them.

Wiesberger, 35, left it until the final qualifying event to claim the last automatic place on the team for next week’s Ryder Cup, knocking out former Open champion Shane Lowry.

Lowry – like Wiesberger a Ryder Cup rookie – was handed one of European captain Harrington’s three picks, along with proven warriors Sergio Garcia and Ian Poulter.

Former world No 1 Rose looked unlucky to miss out, especially after a thrilling final round charge at the BMW PGA Championship hoisted him into a share of sixth place.

But Harrington said it was a case of too little too late from Rose. His form has been scratchy for most of the last two years, with no wins and 12 missed cuts in 34 outings.

Wiesberger needed only a top fifty finish at Wentworth to force his way into the team.

A couple of 67s in the second and third rounds allowed him to coast into a tie for twentieth.

Despite admitting he is a big fan of former US Open champion Rose, Harrington said the big-hitting Austrian would still have made the team if he had come up just short at Wentworth.

He explained: “I’m delighted at how it has worked out, especially as Bernd is a really good, experienced player, and his style of golf suits for Whistling Straits. He played his way in.

“I talked to Justin a few weeks ago and he was very keen that he was going to work on his game, get his game ready. And look, he did.

“But ultimately, Bernd went in and stole his thunder.

“He got in there and got that automatic position. So at the end of the day, there just wasn’t enough room for JR.

“And if he had needed a wildcard, I wouldn’t have skipped past Bernd. He played great these past few weeks and he delivered under pressure.

“If I had four picks, Bernd would have been a pick, anyway.

“I chose to have three picks and I’m very comfortable that it was the right decision.

“There’s always going to be somebody on the bubble. I feel for JR but Bernd fully deserves his place on this team.”

Harrington was offered EIGHT wildcards as Covid restrictions threatened to play havoc with the qualifying process.

But he turned that proposal down. He felt it was important for players to have the chance to make it under their own steam — especially those who play mainly on the European Tour, like eight-time winner Wiesberger.

Harrington said his three rookies — Wiesberger, Lowry and rising star Viktor Hovland from Norway — were ‘jumping out of their skins’ at the prospect of making their debuts against America in Wisconsin.

But they will have to go some to match the enthusiasm of Garcia, even though the record Ryder Cup points-scorer will be making his tenth appearance in European colours.

The Spanish star, who has bagged an incredible 25½ points from 41 matches, said: “The competitive fire definitely burns as bright as ever — there are flames coming out of my ears at the thought of it!”