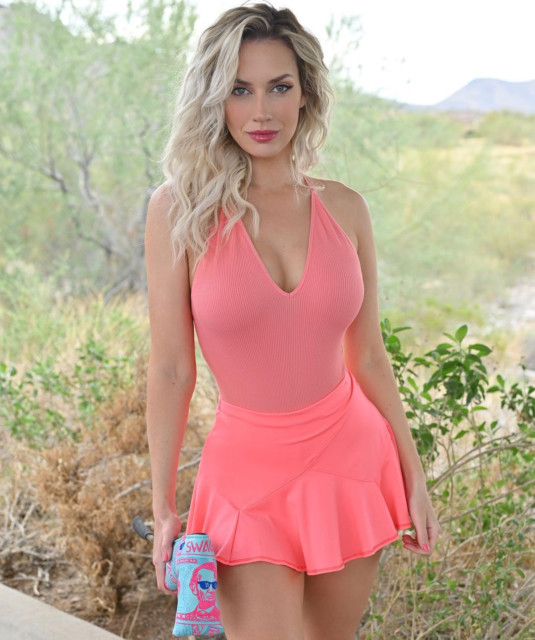 The forming golfing pro, 28, turned her back on a career to focus on her social media celebrity status.

But she still retains a strong interest in the sport and was avidly following last weekend’s Masters at Augusta.

Reminiscing on her playing days on her Playing A Round podcast, the busty American opened up on her bizarre dietary habits.

She said: “Normally for breakfast, I would get so nervous it was hard for me to have an appetite so I would normally eat eggs or oatmeal.

“Then before the round my mum would force feed me a banana basically. She was always like, ‘You have to eat and stay hydrated.’

“My mum used to feed me baby food, like actual baby food as snacks on the golf course.

“It’s not like the mushy baby food, we had these little meat sticks that are really high in protein and easy to eat on the golf course.

“So I would always eat a banana, those baby food meat sticks and a protein drink.

“I was pretty much having baby food all the time. It was in the baby food section but there were quite delicious.

“In college, I would do peanut butter and jelly sandwiches.

“I was not a big eater on the golf course – I could not get myself to eat because I was always so nervous, even throughout the round.”

Asked about her current favourite post-round grub, Spiranac added: “Definitely a hot dog. There is nothing better than a golf course hot dog. I can only eat my hot dogs with ketchup.

“No [doesn’t have a cold beer], I don’t like the taste of alcohol, I don’t mind beer but it reminds me of beer pong and bad college parties, I hate wine, I don’t mind a piña colada.

“And even when I was playing tournaments, ice cream. Good or bad round, I had to get ice cream.”

Spiranac also opened up on her routine before stepping on to the first tee.

She added: “Now that I’m not playing competitively and just for fun, I normally just show and go.

“I won’t even warm up or anything, I’ll just go straight to the first tee and go.

“When I was playing competitively I had a routine down to the tee. Every time, I got to the course an hour and 15 minutes before.

“I would putt first, then chip then work through my bag on the driving range, go back to the putting green for long and short putts. Then I go to the first tee ten or 15 minutes before.”

Spiranac, who has 3million Instagram followers, kept a close eye on the Masters as Hideki Matsuyama became the first Japanese winner.

She revealed how much she was missing watching Tiger Woods in action, dressed up in her own slightly-more-revealing green jacket and aired some of her views on the current state of the game – including wanting green-reading books banned.

And the golfing beauty also opened up on being placed on a course’s ‘watch list’ after snapping a club in anger.