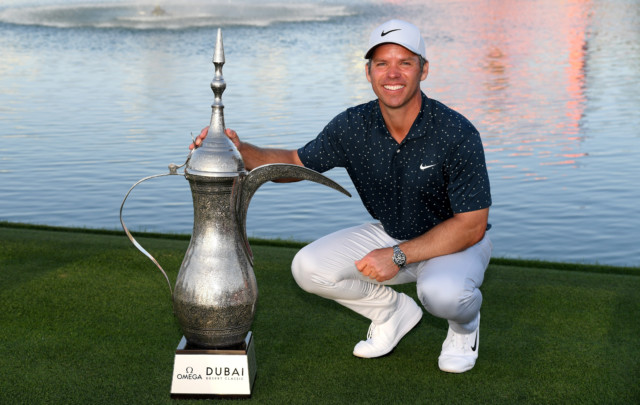 PAUL CASEY became the first man to complete the much-vaunted ‘Desert Double’ as he romped to a four shot victory at the Omega Dubai Desert Classic.

The list of players who have gone agonisingly close to winning here and an hour down the road at the Abu Dhabi Championship includes Tiger Woods, Ernie Els, Rory McIlroy, and Lee Westwood – all former world No1s.

But there was never much doubt about Casey, 43, finally adding the Dubai crown to his 2007 and 2009 victories in Abu Dhabi, as the chasing pack hardly landed a blow.

The Arizona-based Englishman took a slender one shot lead into the final round. But nearest challenger Robert MacIntyre ran up four successive bogeys from the seventh and the Scot limped to a two over 74.

Casey put daylight between himself and the rest with two birdies in the opening four holes, and a two under par 70 saw him claim his 15TH European Tour title – twenty years after he opened his account at Gleneagles.

He said: “It does feel special to add this title to my Abu Dhabi wins, especially when you see the names of some of my all-time heroes on this trophy.- Seve, Tiger, Ernie, and you can throw Monty and Rory in there too.

“I’m always emotional after wins, but with this one, is such a prestigious event. The history of this tournament is amazing and the list of winners is basically a Who’s Who in world golf.

“Dubai has given so much to golf, and this is one of the game’s most iconic trophies. Plus, from my point of view, 15 European Tour wins is pretty cool!

“I was looking  to put my foot down early and extend the lead, although that wasn’t easy because these were the trickiest conditions we’ve faced all week. 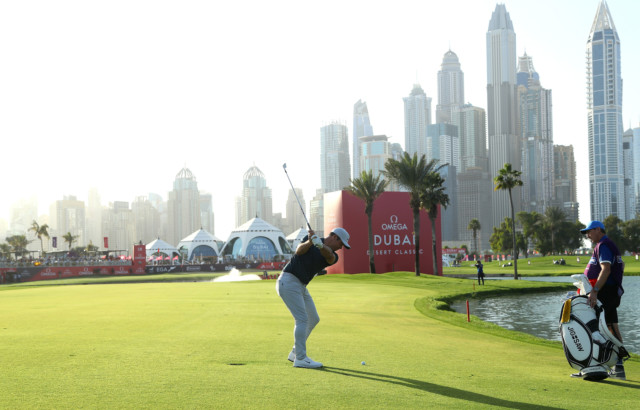 Casey triumphed in the picturesque setting

“But it’s also great to put a stack of Ryder Cup points on the board. I was out of the team for ten years before I made it back for Paris in 2018, and that was the greatest golfing experience I’ve ever had.

“I would love to be part of the team again for Whistling Straits this year. But there’s a long way to go, and I need to keep this form up.”

European captain Padraig Harrington must have been impressed by Casey – and by his own efforts, as a final round 70 earned him a share of sixth place at nine under par.

That was easily his best performance since the three-time Major champion was handed the Ryder Cup captaincy in January 2019.

MacIntyre, 24, took consolation from earning enough world ranking points to climb into the world’s top fifty for the first time. If he stays there until the end of March he will be guaranteed a Masters debut the following month.

He said: “It obviously wasn’t the start I was looking for, but I fought to the end. It wasn’t my day, but Paul was brilliant. He showed great control, and I’ve got to look at that and make sure I learn from it.”