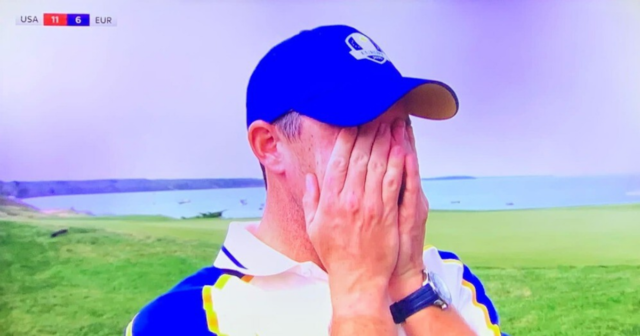 RORY McILROY broke down in tears as he apologised to his Ryder Cup team-mates for his shocking week – despite winning his singles match.

The four-time Major champion could barely speak and covered his eyes with his hands during a heartbreaking interview with Sky Sports.

"I love my team-mates so much and I should've done more for them this week."

An emotional Rory McIlroy reflects on ending his #RyderCup by winning a point for #TeamEurope in the Sunday singles. pic.twitter.com/3p7GY2bYJf

McIlroy was winless going into the final day, where he saw off American Xander Schauffele 3&2.

But he showed just how much this team event – which Europe were set to lose by a record margin – means to him with an emotionally-charged interview.

While saying sorry for his own play, McIlroy made an emotional appeal to boys and girls watching to pick up their clubs and be the stars of the future.

The Northern Irishman, 32, said: “I should have done more for them [my team-mates] this week.

“I’m glad I put a point on the board but I can’t wait to get another shot at this.

“It is by far the best experience in golf and I hope little boys and girls watching this today aspire to play in the event or the Solheim Cup, because there’s nothing better than being part of a team.

“No matter what happens I’m proud of every player, our captain and vice captains.

“I wish I could have given more. I’m glad I got a point but it’s been a tough week.”

Fans were absolutely bowled over by McIlroy’s impassioned speech.

One said: “And that’s why we root for Rory McIlroy.”

Another commented: “Rory McIlroy, you are a champion and a gentlemen. This sport is lucky to have you.”

While another posted: “He may well have been poor on first two days but this shows how much it hurts.”